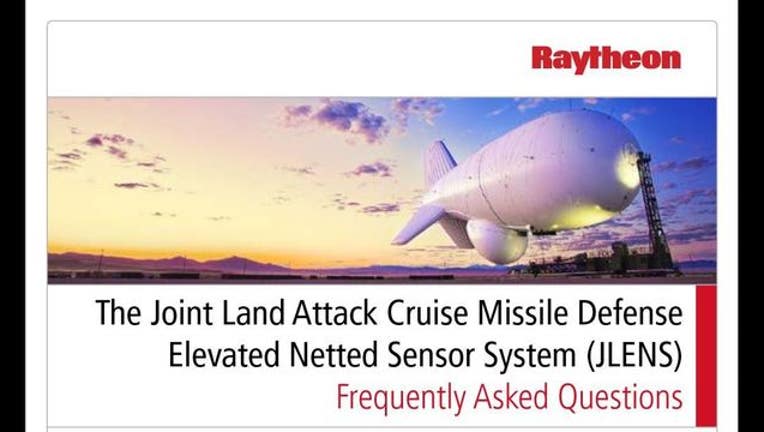 WASHINGTON (AP) - MUNCY, Pa. (AP) — An unmanned Army surveillance blimp broke loose from its mooring in Maryland and floated over Pennsylvania for hours Wednesday with two fighter jets on its tail, triggering blackouts across the countryside as it dragged its tether across power lines.

The bulbous, 240-foot helium-filled blimp finally came down in a wooded hollow near Muncy, a small town about 80 miles north of Harrisburg, as people gawked in wonder and disbelief at the big, white, slow-moving craft.

The North American Aerospace Defense Command said the blimp escaped from its station at the military's Aberdeen Proving Ground around 12:20 p.m. and drifted northward, climbing to about 16,000 feet. It covered approximately 150 miles in all over about 3½ hours.

As it drifted away, two F-16s were scrambled from a National Guard base at Atlantic City, New Jersey, to track it. NORAD spokesman Navy Capt. Scott Miller said there was never any intention of shooting it down.

The blimp — which cannot be steered remotely — eventually deflated and settled back to Earth on its own, according to Miller. He said there was an auto-deflate device aboard, but it was not deliberately activated, and it is unclear why the craft went limp.

He said it was also unknown how the blimp broke loose, and an investigation was under way.

Tiffany Slusser Hartkorn saw it fly over her neighborhood on the outskirts of Bloomsburg around 2:15 p.m. and soon disappear from sight.

"I honestly was worried that there were people in it that would be injured. A neighbor down the road is thinking it knocked down a tree branch and power pole by his house that could've potentially destroyed his house," Hartkorn said.

Wendy Schafer's first thought upon seeing the blimp near her job at a spa and salon in Bloomsburg was that a nearby school was conducting an experiment.

"I had no idea what it was. We lost power at work so I looked outside and saw the blimp," Schafer said. "My first thought was Vo-Tech was doing something at the school until my friends tagged on Facebook about the blimp. It was crazy."

About 27,000 customers in two counties were left without power, according to electric utility PPL, and Bloomsburg University canceled classes because of the outage. Electricity was restored to most people within a few hours.

The craft even knocked out power to the State Police barracks at Bloomsburg barracks before settling among the trees, where it was swiftly cordoned off while military personnel began arriving to retrieve it, State Police Capt. David Young said. He said trees will probably have to be cut down to get it out.

The blimp is the kind used extensively in the Iraq and Afghanistan wars to provide surveillance around U.S. bases and other sensitive sites.

When in use, it is tethered to the ground like a balloon on a string, its cable carrying power up to the blimp and sending data back down to controllers, and it can reach as high as 10,000 feet, according to its maker, Raytheon Co.

"My understanding is, from having seen these break loose in Afghanistan on a number of occasions, we could get it to descend and then we'll recover it and put it back up," Defense Secretary Ash Carter said at the Pentagon as the journey unfolded. "This happens in bad weather."

Miller said the blimp was tethered to a mooring station at an altitude of about 6,600 feet when it broke free.

Raytheon Co. referred questions to the military. But on its website, the defense contractor said the chances of the tether breaking are small because it is made of a durable synthetic fiber that has withstood storms of about 110 mph.

The craft is known as a Joint Land Attack Cruise Missile Defense Elevated Netted Sensor System, or JLENS, and can be used as part of a missile defense system.

The blimp was operating at the Aberdeen Proving Ground as part of a test of the systems that defend the nation's capital against cruise missiles and other airborne threats. The loss of the blimp has not weakened those defenses, Miller said.

"The defense of the D.C. area is very much intact," he said.

Jason Jarinko, a teacher at Central Columbia High School in Bloomsburg, said he was alerted to the blimp by a student who was gazing out the window just before the start of a class.

"We just kind of scoffed that he had seen a bird or something, and he said, 'No, look!' and it was this blimp coming at us from the east," Jarinko said. He said students gathered in disbelief as it passed over at maybe 200 to 300 feet.

"As it got closer to us, all of a sudden our lights started to flicker and we lost power," he said. "At first, we didn't realize the two events were related."

Associated Press writers Robert Burns in Washington and Kristen De Groot and AP photo stringer Jimmy May in Pennsylvania contributed to this report.