LOS ANGELES - As the White House’s social distancing guidelines expire and states like Georgia and Oklahoma lift coronavirus lockdown orders, the desire to go back to the way things were doesn’t necessarily mean that social life will be what it was before the restrictions.

Millions of people around the world got used to a new reality under self isolation, and social distancing isn’t likely to fade away anytime soon.

The mantra “stay home, save lives,” may stick with many people long after the stay-at-home orders are eased as world governments have hinted at encouraging “social bubbles” that would impose limits on the size of social gatherings in public in order to prevent future outbreaks. 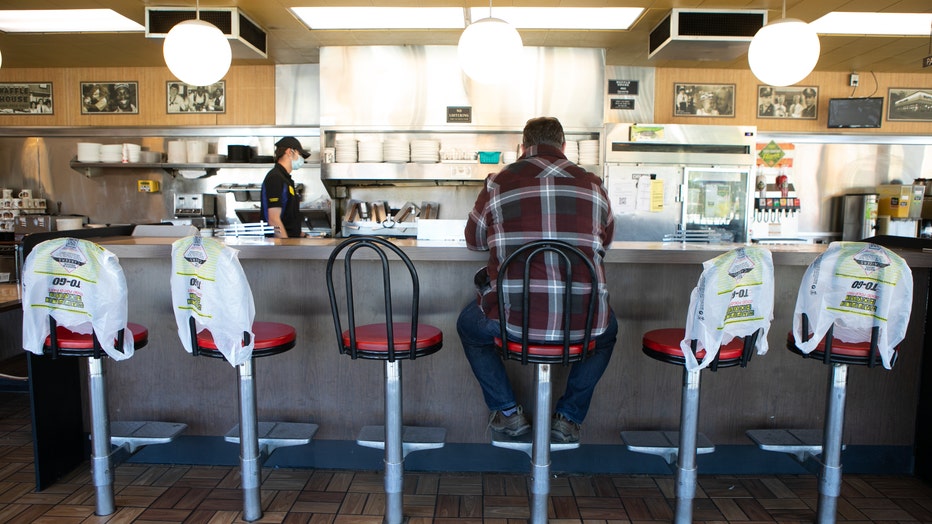 FILE - Ron Flexon sits at the counter for dine-in service while other seats are marked off for social distancing protocol at the Waffle House on April 27, 2020 in Brookhaven, Georgia. (Photo by Jessica McGowan/Getty Images)

According to Belgian newspaper Le Soir, a leaked memo by Belgium officials reportedly suggests allowing no more than 10 people to exclusively meet while prohibiting overlapping with other social circles.

“Every country is going through these decisions, none of us are through this pandemic yet, but some countries are starting to look at slightly expanding what people would define as their household," Sturgeon said.

One Oxford University study argued that while social distancing is the best weapon against the spread of the virus, “Social separation for a long period may have adverse effects, such as loneliness and mental health, but also disrupts economic life (workplace), faith (religious worship), and family (visits of those in care, funeral attendance).”

Neighbors use fence to create makeshift pub amid pandemic

In Queensland, Australia, neighbors used a fence to create an

While the study points out that social distancing guidelines are designed to limit the amount of contact between individuals, “a decrease in the reproduction number can simultaneously be achieved by managing the network structure of interpersonal contact.”

The management of a social network suggests the possibility of gradual introductions of small but contained social circles.

But this means strongly containing and regulating the smaller social circles in order to stop the spread of the virus. How and when the “social bubbles” would be implemented has yet to be decided by world leaders.

While lockdown orders have been working to flatten the curve of COVID-19 in many communities, residents and officials are desperate for alternatives considering the devastation the restrictions have had on the world economy and people’s livelihoods as unemployment numbers in the U.S. surpassed a staggering 30 million by the end of April.

RELATED: Costco to limit number of people in stores

The layoffs in the U.S. amount to 1 in 6 American workers and encompass more people than the entire population of Texas.

‘The darkest hour is just before the dawn’

A desperate need to balance mental health with public safety exists in the COVID-19 pandemic era, and health experts as well as government officials urge residents to hold their ground, warning of a second deadly spike in the coronavirus if social distancing restrictions are eased too soon.

Even if social distancing were to be relaxed at large, the clear and present threat the coronavirus still presents cannot be overstated, according to health officials.

The highly controversial Wisconsin primary that called for voters to leave their homes and head to the polls en masse despite ongoing social distancing restrictions and warnings from health officials resulted in more than 50 people who voted in person or worked the polls during the presidential primary in April being diagnosed with COVID-19.

It remains unclear how many — if any — of those people contracted the virus at the polls and health officials are still collecting testing and tracing information.

RELATED: Stay at home: These states have issued orders for residents not to go out amid COVID-19 pandemic

The numbers come as states across the country are struggling with how to hold fair and safe elections during the coronavirus outbreak. Some states, including Ohio on Tuesday, moved to virtually all-mail elections, closing nearly all polling places. Others have just urged voters to cast absentee ballots, while keeping in-person voting an option.

Britain’s Prime Minister Boris Johnson said the country is past the peak of its coronavirus outbreak, promising to reveal a “roadmap” out of national lockdown but stressing for the plan to be gradual.

Johnson’s statements came at a news conference that was his first public appearance since falling seriously ill with COVID-19 last month, when he was placed in an intensive care unit shortly after experiencing symptoms.

“We’ve come under what could have been a vast peak... and we can now see the sunlight and pasture ahead of us,” he said. “And so it is vital that we do not now lose control and run slap into a second and even bigger mountain.”

Ways to volunteer and make a difference during the pandemic

Even if you're stuck at home, there are still ways you can help others.

The British government said another 674 people with the coronavirus have died in hospitals, nursing homes and other settings, taking the total to 26,771 as of April 30. Only the United States and Italy have higher tolls, though Johnson stressed that international comparisons are “very difficult.”

Despite a grim and still-climbing death toll of more than 60,000 as of April 30, according to a John’s Hopkins University count, Trump has urged states to hasten their reopenings, and has said he's hoping to hold mass campaign rallies in the coming months with thousands of supporters, even though medical experts have said there is little hope of having a vaccine by then.

As of April 30, the virus had killed more than 230,000 people worldwide, including more than 61,000 in the U.S., according to a tally by Johns Hopkins University. Confirmed infections globally topped 3.2 million, with more than 1 million of them in the U.S., but the true numbers are believed to be much higher because of limited testing, differences in counting the dead and concealment by some governments.