Following Tuesday's historic touchdown on the asteroid Bennu, NASA has released never-before-seen images of the OSIRIS-REx spacecraft kicking up rocks and debris on the space rock's surface. (Credit: NASA via Storyful)

LOS ANGELES - A huge asteroid called Apophis will make its closest approach to Earth, but pass safely by our planet Friday evening.

According to Space.com, Apophis will remain about 44 times as distant as the moon on March 5. "At its closest point, the asteroid will be more than 10.2 million miles from Earth," according to the website.

The near-Earth asteroid is approximately 1,100 feet across — about the size of three-and-a-half football fields — and was first discovered in 2004 at the Kitt Peak National Observatory in Tucson, Arizona.

But this will not be the last time Earthlings get a peek at the celestial traveler.

Apophis will pass Earth again in 2029

Initial calculations of the trajectory of the asteroid caused a stir, as data indicated a small possibility it would impact Earth in 2029. 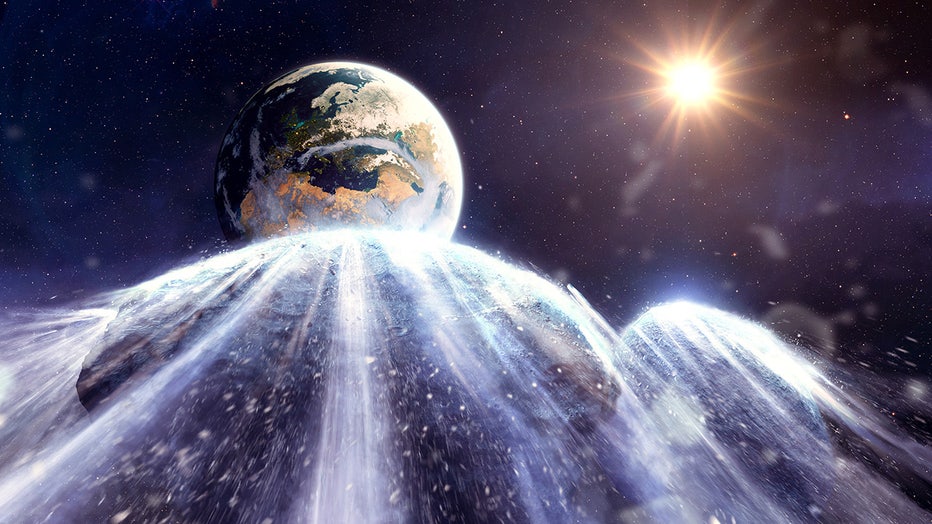 Illustration of an asteroid racing towards Earth, created on July 19, 2015. (Illustration by Tobias Roetsch/Future Publishing via Getty Images)

While scientists have ruled this possibility out, NASA says it will still pass even closer to Earth in 2029 — within 19,000 miles of Earth’s surface.

"While that’s a safe distance, it’s close enough that the asteroid will come between Earth and our Moon, which is about 238,855 miles away. It’s also within the distance that some spacecraft orbit Earth," NASA wrote.

"The Apophis close approach in 2029 will be an incredible opportunity for science," Marina Brozović, a radar scientist at NASA’s Jet Propulsion Laboratory in Pasadena, California, who works on radar observations of near-Earth objects (NEOs), said. "We’ll observe the asteroid with both optical and radar telescopes. With radar observations, we might be able to see surface details that are only a few meters in size."

According to EarthSky, Apophis will also make noteworthy passes near Earth in 2036 and again in 2068.

Since the asteroid is now within range of earthly telescopes and radar, astronomers are tracking its movements, and you can watch.

The Virtual Telescope Project in Rome plans to feature the flyby over a webcast starting at 7 p.m. ET. Friday evening.