A local couple took a little extra time before heading to the hospital to deliver their newest child.

AUBREY, Texas - A local couple took a little extra time before heading to the hospital to deliver their newest child.

While everything turned out okay, it also meant their baby was born in their SUV delivered by dad with the help of 911.

The Taylor family had been in quarantine for months, minimizing their exposure to COVID-19. They were hoping to avoid a trip to the emergency room. Their son couldn't wait so his parents had to improvise. 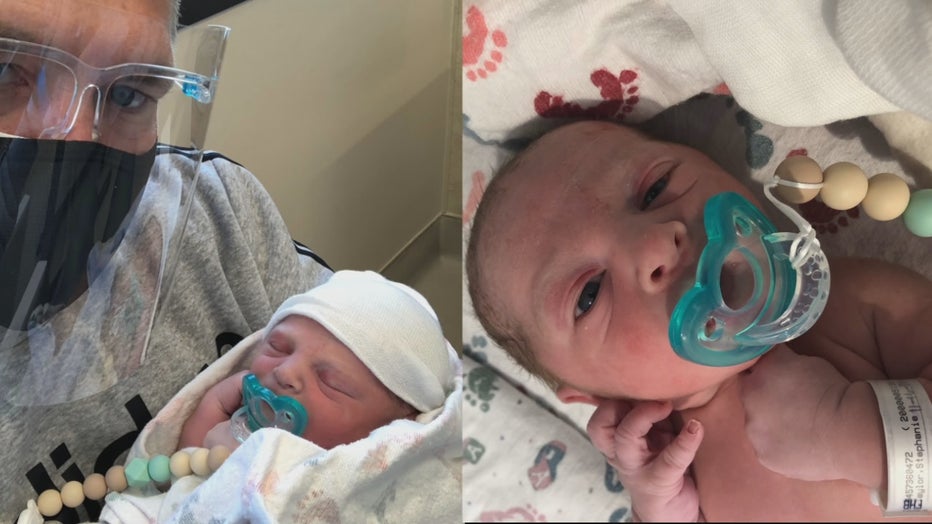 Sawyer Link Taylor came into this world in a hurry. Weighing 6 pounds and 12 ounces, the little bundle of joy was born in the passenger seat of his parent's brand-new SUV on Monday.

The birth took place in a field about a mile from the family's Aubrey home. Dad was forced to play doctor.

Stephanie Taylor is a doula. She's also given birth three times before. So mom says she thought she had more time to get to the hospital when her water broke about two hours prior.

“I mean who has a baby that fast?!” she recalled.

Another reason for the delay to the hospital was a concern over rising COVID cases. The couple wanted to go straight to the labor and delivery unit.

“I think when you add COVID to that, it's an unknown factor,” said the dad, Steve Taylor.

“When my water broke, I wasn't having contractions at all. It was too early and we would've had to go through the ER,” Stephanie said. “Instead, I decided to do laundry, take out the trash and do other things, which I probably shouldn't have done.”

An ambulance showed up to the field just as baby Link was entering the world. The family was taken to Texas Health Frisco."

The couple says they felt at ease with the health protocols in place. A day later, the trio was released from the hospital.

Surrounded by his parents and siblings, Link is now at home taking a nap and no doubt wiped out from all the excitement he caused.

“I mean considering the situation, I wouldn't take anything back,” Stephanie said. “It was fast, not very painful and I have a beautiful baby.”

Stephanie says she has no regrets. Steve says if he had to do it again he would leave the house sooner. Both say they felt extremely safe at the hospital. Everyone was wearing appropriate personal protective equipment.