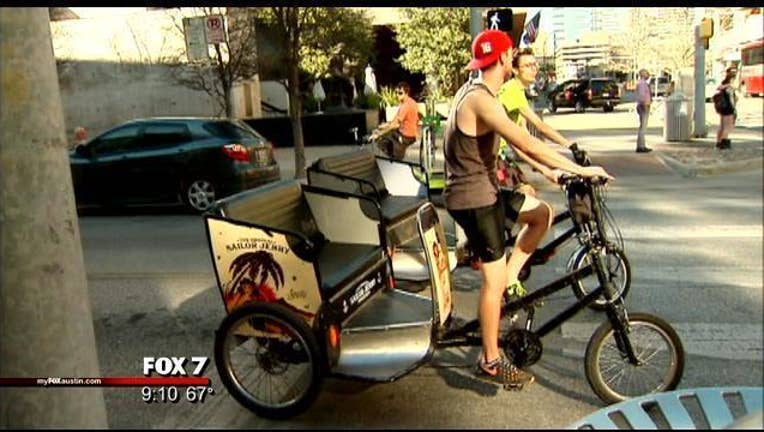 AUSTIN, Texas - Brandon Bynum spends most of his days on a bike.

He also rides when he's off duty.

Like Brandon fellow pedicab riders Joshua Sanderson and Tanner Forrest wish they could get through lights a little faster.

Forrest says, "When I'm pulling 600-700 pounds it can be frustrating having to sit there and traffic is just sitting behind me."

The City is looking to help folks like these three by adding 32 bike sensors around town. The City Council will consider the item at their next meeting, February 12th.

The City is also working with a developer to pilot an app that would help cyclists turn the lights green faster.

According to Tanner Forrest, "It would not only help our business but it would keep traffic flowing and keep people safer."

Don Zimmerman represents District 6 in Northwest Austin. Not only does he think the program is a bad idea but he says it was buried in a list that he's barely had time to get through.

Councilman Zimmerman says "...we had 85 agenda items, so far 85 and more were added late and only 6 or 8 of those items came from City Council."

Zimmerman is blaming the City Manager's Office for pushing most of those new policies.

The District 6 Councilman argues that, "the elected City Council is being managed by the City Manager's Office, we are being force to confront items that we didn't ask for on the agenda."

That includes moving toward a more bike-friendly city.

"There's so much momentum in favor of this social engineering to try to get people out of their cars and onto bicycles it looks to be difficult to slow this down," says Zimmerman.