Last weekend, the six letter, DIY "Austin" sign hung off the side of a mountain. Each letter was seven feet tall, three feet wide and was handmade by a group of Austinites.

AUSTIN, Texas - The side of the 360 Overlook near the Pennybacker Bridge is empty, but it was recently home to the city’s very own "Austin" sign. A sign inspired by the iconic Hollywood sign in California.

Last weekend, the six letter, DIY "Austin" sign hung off the side of a mountain. Each letter was seven feet tall, three feet wide and was handmade by a group of Austinites.

"It looked beautiful and people loved it, so I guess it was worth it," said Blake Messick, a content creator who came up with the sign idea.

Messick says he got the idea from a friend and then enlisted a few of his other friends to make it into a reality.

"My friend had the idea of kind of like, ‘oh, Austin is a new L.A.’. He had the idea of what if we took something from L.A., one of the most iconic pieces, and applied it [in Austin]," said Messick. 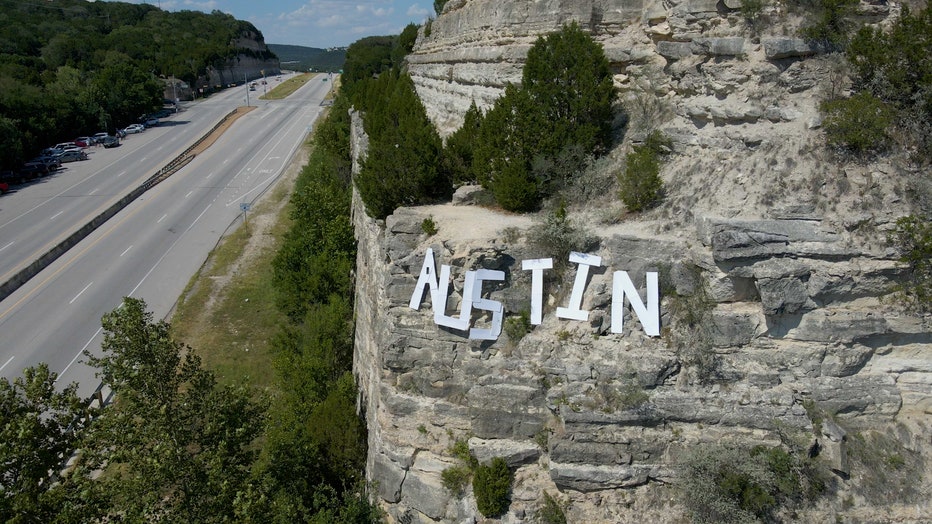 He says it was not an easy task. From the drawing board to execution, Messick says the whole process took about a week.

The sign was handmade out of wood by him and his friends.

"Once that was done, in the middle of the night for dramatic effect, six of us carried it up the top of the mountain letter by letter, and we hung it over the side using steel cables that we tied back to the rocks. It took about 3 hours to do," said Messick.

In the end, he says he did it to put a smile on the faces of those driving by. Although, he does admit, the sign received a mixed reaction.

"Some people love it. Some people hate it. It's a very polarizing thing. A lot of people don't want Austin to be the new L.A.," he said.

For three days, the Austin sign hung on display before the friend group ultimately took it down. Messick hopes the city really thinks about installing something more permanent.

"Building a bigger, better version in an approved area," he said.