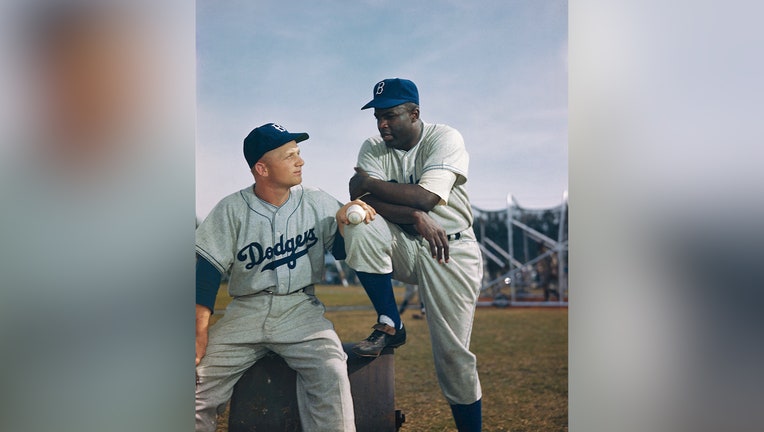 FILE - Bobby Morgan and Jackie Robinson of the Brooklyn Dodgers while at Vero Beach in Florida.

It’s baseball season again, and there’s no better time to get into the spirit for opening day with movies and documentaries featuring some of the game’s most iconic players — all free to stream on Tubi.

The COVID-19 pandemic has thrown seasonal sports for a loop, altering schedules and triggering preventative health guidelines for players and fans to slow the spread of the coronavirus.

But as vaccinations ramp up, more and more Americans are feeling hopeful.

From Comerica Park to Coors Field to the Coliseum, Major League Baseball is set to roll out a big welcome mat on opening day, but with limitations.

At Fenway Park, where Xander Bogaerts and the Boston Red Sox host Baltimore, 12% of capacity will be allowed. At Globe Life Field in Texas, where the Rangers open April 5, a full 100% will be permitted.

Baseball season starts April 1 and what better way to batter up for America’s favorite pastime than with some inspiring stories that will get you singing, "Take Me Out to the Ball Game."'

"At the end of his career, a major league baseball player heads back home to Mexico where he is recruited by a ragtag team of kids to coach them."

"When a hapless slacker falls in love, he tries to get his softball teammates to change their losing ways before they get expelled from their league."

"A hard-edged, legendary baseball coach teams up with an inexperienced assistant coach to bring their struggling little league to the next level."

"The pressure is on for Ginny, the first woman to play Major League Baseball. Will she be able to play her best game with the whole world watching?"

"A dramatization about the infamous 1919 "Black Sox Scandal," in which eight members of the Chicago White Sox conspired with gamblers to throw the World Series in return for cash."

"Jackie Robinson stars as himself in this classic chronicling his life from youth to his rise as a legend with the Brooklyn Dodgers."

"From joining the New York Yankees to wedding his sweetheart to the brutal disease that would end his life, this is the story of a baseball legend."

"A 12-year-old boy, with help from his father, lets nothing stand between him and his dream to play in the junior world series."

A Mile in his Shoes (2011): Starring Luke Schroder, Dean Cain and George Canyon.

"A minor league baseball team needs a new pitcher, and a man with Asperger's syndrome could be the one to change their losing streak."

"A young boy battling cancer is taken on a magical adventure, meeting legendary New York Yankees who give him lessons about baseball and life."

"A man recounts the cross-country journey of his 15-year-old self and his disabled younger brother to see baseball player Roberto Clemente's 3,000th hit."

RELATED: ‘Titanic 2,’ ‘The VelociPastor’: These movies actually exist, and you can stream them free on Tubi

"Relive the exciting 2016 baseball season with the team that won it all, the Chicago Cubs, through comprehensive highlights and exclusive interviews."

"The Houston Astros thrilled fans with a riveting and fearless Postseason run through the Red Sox, Yankees, and Dodgers. That's strong."

"Witness the most amazing moments of the Boston Red Sox’s 2018 World Series run against the Los Angeles Dodgers through a mesmerizing hi-def lens."

"Hank Aaron and Derek Jeter, with Kevin Costner narrating, lead a cast of baseball legends & scientists who explore the magic within the 396 milliseconds it takes a fastball to reach home plate, and decipher who threw the fastest pitch ever."