Israel and Hamas have announced a cease-fire to end a bruising 11-day war that caused widespread destruction in the Gaza Strip and brought life in much of Israel to a standstill.

A statement said his Security Cabinet unilaterally approved the Egyptian-mediated proposal. The two sides were still negotiating exactly when it would take effect. Multiple reports said the truce was to go into effect at 2 a.m., just over three hours after the cabinet’s decision.

"The political leaders emphasized that the reality on the ground will be that which determines the future of the campaign," the statement said.

President Joe Biden spoke from the White House shortly before the ceasefire was set to go into effect in Gaza, where Israel has struck hundreds of targets in retaliation for Hamas firing thousands of rockets into its territory.

Says Biden: "I believe we have a genuine opportunity to make progress and I’m committed to working for it."

Biden said the U.S. was committed to helping Israel replenish its supply of interceptor missiles for its Iron Dome protection system and to working with the Palestinian Authority – not Hamas — to provide humanitarian aid to Gaza.

The decision came after heavy U.S. pressure to halt the offensive. There was no immediate comment from Hamas.

The White House also confirmed that President Joe Biden will deliver remarks on the situation later in the day.

Since fighting broke out on May 10, Israel has launched hundreds of airstrikes that it says have targeted Hamas’ infrastructure, including a vast tunnel network. Hamas and other militant groups embedded in residential areas have fired over 4,000 rockets at Israeli cities, with hundreds falling short and most of the rest intercepted.

At least 230 Palestinians have been killed, according to Gaza health officials, while 12 people in Israel have died.

Israel unleashed a new wave of airstrikes across the Gaza Strip on Thursday and Hamas fired more rockets into Israel, despite growing signs that the sides were close to a cease-fire that would end 11 days of heavy fighting.

In an apparent sign of progress, Prime Minister Benjamin Netanyahu convened an emergency meeting of his Security Cabinet, where the issue of a cease-fire was expected to be debated.

An Egyptian official said Israel has informed his government, which is mediating a truce, that it intends to end its military operations in Gaza. Speaking on condition of anonymity because he was discussing behind-the-scenes diplomacy, he said an announcement was expected following the Security Cabinet meeting.

In Washington, White House press secretary Jen Psaki said reports of a move toward a ceasefire were "clearly encouraging." She said the U.S. was trying "to do everything we can to bring an end to the conflict."

With U.N. Secretary-General Antonio Guterres urging an immediate cease-fire, a U.N. Mideast envoy was in the Gulf state of Qatar to help with efforts to restore calm, a diplomatic official said. Energy-rich Qatar often helps mediate between Israel and Hamas and has donated hundreds of millions of dollars for development and humanitarian projects in Gaza in recent years. The diplomat spoke on condition of anonymity because he was not authorized to discuss the matter with the media.

Osama Hamdan, a top Hamas official based in Lebanon, also said he expected a cease-fire within the coming day.

Biden on Wednesday publicly pressed Netanyahu to wind down the operation. The Israeli leader initially pushed back, appearing determined to inflict maximum damage on Hamas in a war that could help save his political career. But by Thursday evening, Israeli media were reporting that a cease-fire agreement was expected to take effect by early Friday, perhaps sooner.

Despite the signs of progress, fighting continued into the evening, with Israeli airstrikes on targets in Gaza and Palestinian militants firing rockets toward Israeli cities. In past rounds of violence, fighting has picked up in the final hours, with each side trying to eke out a final achievement before a cease-fire went into effect. 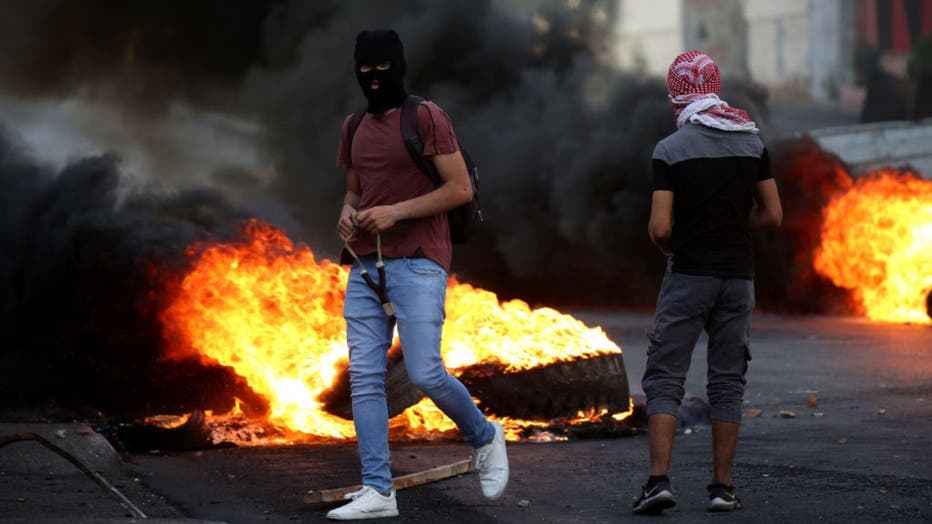 FILE - Palestinians respond to Israeli intervention during a demonstration to protest against Israeli attacks on Gaza Strip, on May 20, 2021 in Bethlehem, West Bank.

The Israeli military said it struck at least three homes of Hamas commanders in Khan Younis and another in Rafah, targeting "military infrastructure," as well as a weapons storage unit at a home in Gaza City.

On Wednesday, Biden told Israel on Wednesday that he expected "a significant de-escalation today on the path to a cease-fire" — but Netanyahu pushed back, saying he was "determined to continue this operation until its aim is met." It marked the first public rift between the two close allies since the fighting began and posed a difficult test of the U.S.-Israel relationship early in Biden’s presidency.

Visiting the region, German Foreign Minister Heiko Maas said Israel has "the right to defend itself against such unacceptable attacks." But he also expressed concern about the rising number of civilian victims and voiced support for truce efforts.

Even as the diplomatic efforts appeared to gather strength, an Israeli airstrike smashed into the Khawaldi family’s two-story house in Khan Younis, destroying it. The 11 residents, who were sleeping outside the home out of fear, were all hospitalized, said Shaker al-Khozondar, a neighbor.

Shrapnel also hit his own home, killing his aunt and wounding her daughter and two other relatives, he said. Al-Khozondar spoke from the bedroom where his aunt Hoda died. The windows were shattered and the bed pillows and rubble stained with blood.

Weam Fares, a spokesman for a nearby hospital, confirmed the death and said at least 10 people were wounded in strikes overnight.

Heavy airstrikes also pummeled a street in the Jabaliya refugee camp in northern Gaza, destroying ramshackle homes with corrugated metal roofs nearby. The military said it struck two underground launchers in the camp used to fire rockets at Tel Aviv.

The current round of fighting between Israel and Hamas began May 10, when the militant group fired long-range rockets toward Jerusalem after days of clashes between Palestinian protesters and Israeli police at the Al-Aqsa Mosque compound, a flashpoint site sacred to Jews and Muslims. Heavy-handed police tactics at the compound and the threatened eviction of dozens of Palestinian families by Jewish settlers had inflamed tensions.

Since then, Israel has launched hundreds of airstrikes that it says have targeted Hamas’ infrastructure, including a vast tunnel network. Hamas and other militant groups embedded in residential areas have fired over 4,000 rockets at Israeli cities, with hundreds falling short and most of the rest intercepted.

At least 230 Palestinians have been killed, including 65 children and 39 women, with 1,710 people wounded, according to the Gaza Health Ministry, which does not break the numbers down into fighters and civilians. Hamas and militant group Islamic Jihad say at least 20 of their fighters have been killed, while Israel says the number is at least 130. Some 58,000 Palestinians have fled their homes.

Twelve people in Israel, including a 5-year-old boy, a 16-year-old girl and a soldier, have been killed. The military said an anti-tank missile fired from Gaza hit an empty bus near the frontier on Thursday, lightly wounding an Israeli soldier.

Since the fighting began, Gaza’s infrastructure, already weakened by a 14-year blockade, has rapidly deteriorated. Medical supplies, water and fuel for electricity are running low in the territory, on which Israel and Egypt imposed the blockade after Hamas seized power in 2007. 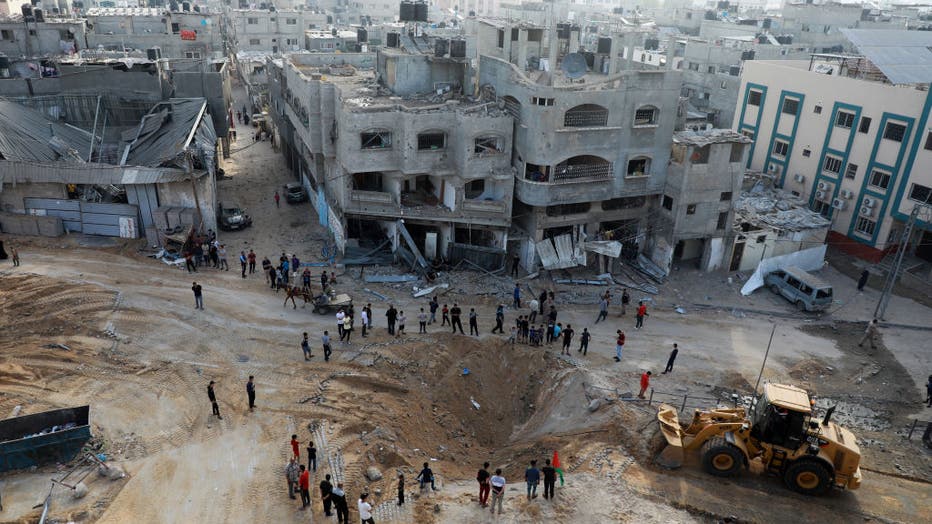 Palestinians gather at the site of Israeli air strikes in Jabalia in the northern Gaza Strip, on May 20, 2021. (Photo by Majdi Fathi/NurPhoto via Getty Images)

Israeli bombing has damaged over 50 schools across the territory, according to advocacy group Save the Children, completely destroying at least six. While repairs are done, education will be disrupted for nearly 42,000 children.

Israeli attacks have also damaged at least 18 hospitals and clinics and destroyed one health facility, the World Health Organization said. Nearly half of all essential drugs have run out.