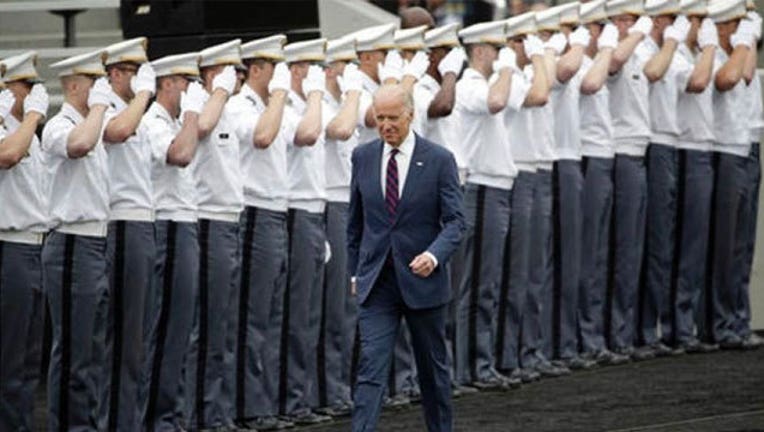 May 21, 2016: Vice President Joe Biden arrives for a graduation and comissioning ceremony at the U.S. Military Academy in West Point, NY.

"Having men and women together in the battlefield is an incredible asset, particularly when they're asked to lead teams in parts of the world with fundamentally different expectations and norms," Biden said in his speech at a graduation ceremony at Michie Stadium on the West Point grounds along the Hudson River.

More than 950 cadets received their degrees and commissions as second lieutenants. Among them were the first seven women to be commissioned into combat divisions since combat restrictions for them were lifted.

Before the repeal of the military's "don't ask, don't tell" policy in 2010, "E.J. would have been discharged from the Army, and we would have lost an incredible talent," he said. "Thanks for your courage, E.J., and I expect we're going to hear big things from you, pal."

Biden also warned the graduating class that it's facing a vast range of complex challenges, including battling Islamic State extremists, containing outbreaks of contagious diseases and defending against cyberattacks.

"Whenever the stakes are highest, we turn to the United States Army," he said. "Whether it's fighting terrorism, training our partners, reassuring our allies or providing humanitarian relief, we call on you," he said. "And right now, the stakes could not be higher."

Biden singled out cyberattacks as a growing threat that could allow American enemies to knock out the nation's power grid or disable satellite systems.

"The bad thing about advanced technology is that it gives immense powers to stateless actors," Biden said.

He added: "You'll need to dominate the cyber realm as you do the physical one."