WASHINGTON - President Joe Biden on Wednesday announced a tax incentive for businesses to give employees paid leave to get vaccinated against COVID-19 as the U.S. approaches his goal of 200 million shots administered during his first 100 days in office.

The White House is trying to overcome diminishing demand for COVID-19 shots by offering the incentive.

Half of all U.S. adults — or more than 133 million people — have received at least one dose of a vaccine, the U.S. Centers for Disease Control and Prevention reported. Roughly 86 million adults, or about 33.3% of the total adult population, have been fully vaccinated.

Over the last week, the pace of inoculation in the U.S. has slowed slightly. That is partly a reflection of disruptions from the "pause" in the administration of the Johnson & Johnson shot for a safety review, but also of softening interest for vaccines in many places even as eligibility has been opened to all those older than 16.

In a White House speech on Wednesday, Biden acknowledged entering a "new phase" in the federal vaccination effort that relies on increased outreach to Americans to get their shots, both to protect them and their communities.

"Vaccines can save your own life, but they can also save your grandmother’s life, your co-worker’s life, the grocery store clerk or the delivery person helping you and your neighbors get through the crisis," Biden said. "That’s why you should get vaccinated." 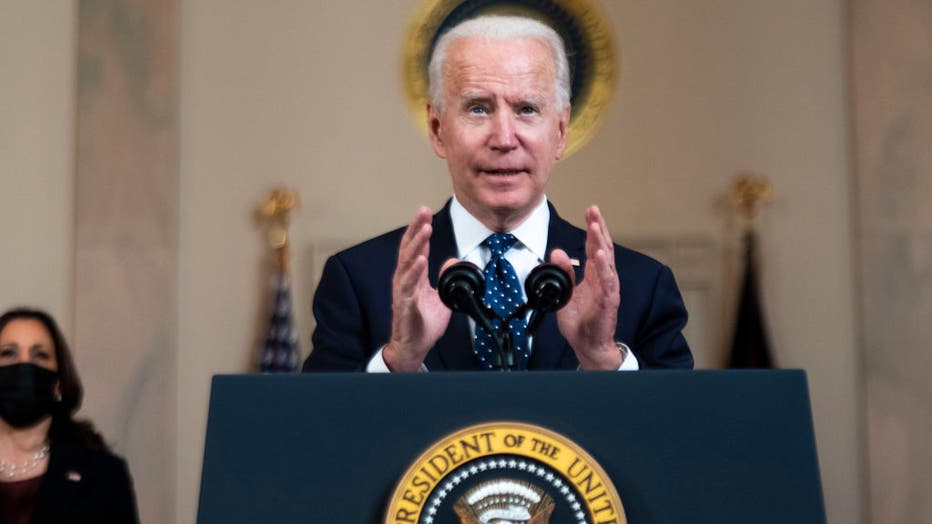 President Joe Biden gives remarks from the Cross Hall of the White House on April 20, 2021 in Washington, D.C. (Photo by Doug Mills/Pool/Getty Images)

Maximizing the number of Americans inoculated in the coming months is critical for the White House, which is aiming to restore a semblance of normalcy around the Fourth of July and even more so by the beginning of the next school year.

Surveys have shown that vaccine hesitancy has declined since the rollout of the shots, but administration officials believe they have to make getting vaccinated easier and more appealing, particularly for younger Americans who are less at risk from the virus and do not feel the same urgency to get a shot. That means providing incentives and encouragement to get vaccinated, as well as reducing the friction surrounding the vaccination process.

Biden announced a tax credit for small businesses to provide paid leave for those getting vaccinated or potentially needing to take time off to recover from side effects. Paid for through the $1.9 trillion virus relief package passed last month, the tax change would provide a credit of up to $511 per day, per employee for businesses with fewer than 500 workers to ensure that those workers or businesses don't suffer a penalty by getting vaccinated.

The White House is calling on larger employers, which have more resources, to provide the same benefits to their employees, and to institute vaccine education and encouragement campaigns so that their workers get shots.

"We’re calling on every employer, large and small, in every state, give employees the time off they need with pay to get vaccinated," Biden said.

According to the White House, just 43% of working adults have received at least one shot

RELATED: 'Go and get 'em, folks': All adults in US now eligible for COVID-19 vaccine

Administration officials have been careful to avoid predicting when the country will have vaccinated enough people to reach herd immunity — a term for when enough people become immune to a disease to make its spread unlikely. The U.S. is on track to have enough vaccine supply for every adult by the end of May and for every American by July, but administering the shots will be another matter.

Biden set his goal of 200 million shots last month after meeting his 100 million-in-100 days goal just over a month ago. At the time the U.S. was well on pace to meet the higher target, and the pace of vaccinations has only accelerated, to about 3 million shots per day.

The 100 million-dose goal was first announced on Dec. 8, days before the U.S. had even one authorized vaccine for COVID-19, let alone the three that have now received emergency authorization. Still, it was generally seen within reach, if optimistic.

By the time Biden was inaugurated on Jan. 20, the U.S. had already administered 20 million shots at a rate of about 1 million per day, bringing complaints at the time that Biden’s goal was not ambitious enough. Biden quickly revised it upward to 150 million doses in his first 100 days.

It was a deliberate effort by Biden to set clear — and achievable — metrics for success as part of a strategy of underpromising, then overdelivering. Aides believe that exceeding his goals breeds trust in government after the Trump administration’s sometimes fanciful rhetoric on the virus, according to the Associated Press.

J&J’s COVID-19 vaccine, one of the three vaccines that have been administered in the U.S., was dealt a blow last week when federal health regulators recommended a pause of the single-dose shot after reports of extremely rare blood clots.

The nation's top infectious diseases expert indicated Sunday that the government will likely move to resume use of J&J's COVID-19 vaccine this week, possibly with restrictions or broader warnings after reports of some very rare blood clot cases.

Dr. Anthony Fauci, in a series of news show interviews, said he expects a decision when advisers to the CDC reconvene on Friday to discuss the pause in J&J’s single-dose vaccine.

"I would be very surprised if we don’t have a resumption in some form by Friday," he said. "I don’t really anticipate that they’re going to want it to stretch it out a bit longer."

Fauci, who is Biden’s chief medical adviser, said he believed that federal regulators could bring the shots back with restrictions based on age or gender or with a blanket warning so that it is administered in a way "a little bit different than we were before the pause."

The European Union’s drug regulatory agency also said this week that it found a "possible link" between J&J’s shot and the rare blood clots and that a warning should be added to the label. But experts at the agency reiterated that the vaccine’s benefits outweigh the risks.

RELATED: What you need to know about your COVID-19 vaccine card, and what to do if you lose it