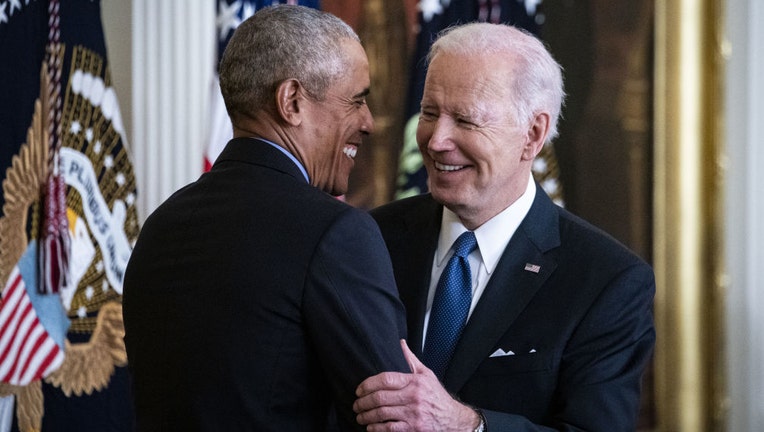 WASHINGTON - President Joe Biden is hinting again that he intends to seek a second term in office. The Hill reported Tuesday that Biden informed former President Barack Obama that he plans to run for re-election in two years.

Biden has previously addressed his political future publicly. During a NATO summit in Brussels last month, the president told reporters that he would be "very fortunate" if in the next presidential election his opponent was former President Donald Trump. Biden defeated Trump in the 2020 presidential election.

In November 2021, White House Press Secretary Jen Psaki confirmed to reporters that Biden would run for re-election in 2024. When asked by a reporter if he was considering running for re-election, Psaki responded "yes, that’s his intention."

RELATED: ‘It’s his intention’: Biden will run for re-election in 2024, Psaki says

Trump hasn’t confirmed if he will seek the White House again in 2024 but has hinted at it. In 2021, he spoke at a New York fire station on Sept. 11 where he responded to speculation of a possible presidential run. Trump said he knows what he wants to do, but campaign finance laws prohibit him from saying too much.

Biden, who is 79, would be 82 years if he were to be re-elected as president in 2024. News of Biden seeking re-election comes amid low approval ratings during his first year in office.

Many of the concerns among Americans are related to inflation reaching a 40-year high, surging gas prices, and the president’s handling of Russia’s invasion of Ukraine.

To manage price surges at the pump, Biden announced last week a step at trimming gas prices by roughly a dime a gallon at a limited number of stations by waving rules that restrict ethanol blending.

The Associated Press-NORC Center for Public Affairs Research conducted several polls over the past year to gauge where the country stands on Biden’s job performance.

According to one poll from January, Biden ended his first year in the White House with most Americans disapproving of his performance amid the pandemic and inflation.

In another AP-NORC poll from March, few Americans expressed confidence that Biden could handle a crisis with most believing he lacked toughness in dealing with Russia. Only 43% approved of Biden and a similar number approved of his handling of the relationship with Russia.

Additionally, only a quarter of people were confident that Biden had the ability to handle a crisis, promote U.S. standing in the world, or effectively manage the U.S. military. Fifty-six percent of Americans think the president has not been tough enough on Russia, while 36% said his approach has been "about right."

Most Republicans and Democrats said they approve of economic sanctions imposed on Russia in general and the ban on Russian oil, according to the poll. But while 77% of Democrats approve of how Biden is handling the relationship with Russia, just 12% of Republicans do.

Some Democrats have acknowledged that Biden could do more, but many in the party are confident in him to do what’s best for the country.

According to another AP-NORC poll from February, Biden’s approval rating hit a low for his first year in office with more people disapproving than approving of his job performance, 56% to 43%.

In July 2021, 59% of Americans said they approved of Biden’s job performance in an AP-NORC poll. His approval rating dropped to 50% by September related to the chaotic U.S. military withdrawal from Afghanistan and rising coronavirus infections.

One of Biden’s biggest accomplishments in his first term so far has been the passage of a $1.9 trillion COVID relief package and a $1.2 trillion bipartisan infrastructure bill.

FOX 10 Phoenix, FOX 29 Philadelphia, FOX 11 Los Angeles, and the Associated Press contributed to this story.  This story was reported from Washington, D.C.