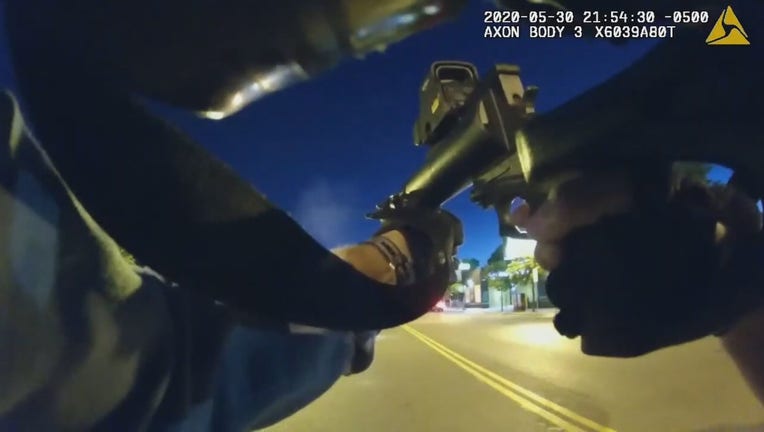 The video, which comes from the attorney of a man who was acquitted of firing at police during the riots, documents the moments leading up to his own exchange with officers.

More Minneapolis police body camera footage was released in the Jaleel Stallings case after he was acquitted.

The footage shows officers talking about "hunting" protesters, slashing tires, laughing and more. The officers were assigned to riot control on the fifth night of unrest following the death of George Floyd.

The new batch of body camera footage released Tuesday is part of the criminal case against Jaleel Stallings, who shot at officers after being hit with rubber bullets. Stallings was acquitted of all charges a month ago, arguing he acted in self-defense, unaware that the unmarked van he returned fire with were police officers.

Stallings’ attorney, Eric Rice, released the extended body camera footage of the nearly two hours leading up to that moment, saying it shows how police were targeting civilians that night.

Also in the video, Officer Bittell can be heard saying, "alright, we’re rolling down Lake Street, the first f**rs we see, we’re just hammering them with 40s."

In much of the footage, officers are seen driving down largely empty streets, firing non-lethal rounds at people out past curfew.

Minutes before encountering Stallings, they fired on people outside a gas station - only to find it was the owners outside trying to protect their store.

The Minneapolis Police Department responded to the latest batch of footage, saying there is an active and ongoing internal investigation into what’s seen and heard.

Chief Arradondo has previously defended his officers, saying the videos need to be viewed in context as the officers were on the fifth night of rioting.