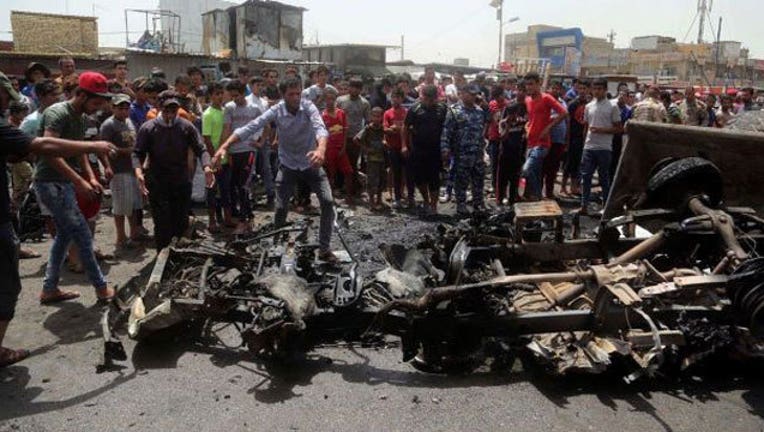 The separate bombings, which also wounded 165 people, came at a time of turmoil and deadlock in Iraq's government and parliament. The Interior Ministry blamed the attacks on "political bickering" that is increasingly threatening the security of the civilian population.

The largest car bomb ripped through a crowded outdoor market selling food, clothing and household goods in the predominantly Shiite neighborhood of Sadr City during the morning, killing at least 63 people and wounding 85.

Streets were stained with blood, building facades were heavily damaged and smoke billowed from stores gutted by the blast. Dozens of people walked through mangled wreckage of cars and other debris as ambulances ferried away the injured.

The bomb was in a pickup truck loaded with fruit and vegetables. It was parked by a man who had quickly disappeared into the crowd, said Karim Salih, a 45-year-old grocer who escaped injury.

"It was such a thunderous explosion that jolted the ground," Salih told The Associated Press. "The force of the explosion threw me for meters away and I lost consciousness for a few minutes."

The sprawling slum of Sadr City is home to 2.5 million people — almost half of Baghdad's population of about 6 million.

Two more car bombs exploded elsewhere in the afternoon, killing at least 30 and wounded 80, police officials said. One bomb targeted a police station in the northwestern Kadhimiyah neighborhood, while another struck in the northern neighborhood of Jamiya.

The casualty figures were released by medical officials who all spoke on condition of anonymity because they were not authorized to brief reporters.

In online statements, the Islamic State group claimed responsibility for the bombings, which were condemned by Prime Minister Haider al-Abadi, as well as the United States.

The IS group said it had targeted Shiite militiamen, but hospital and security officials said the vast majority of the victims were civilians. The AP could not immediately verify the authenticity of the IS claims, but they appeared on a website commonly used by the Sunni extremists.

"These attacks demonstrate that terrorists carry out these abominable attacks without regard to innocent civilian life in order to stoke tensions between these communities even further," said White House spokesman Josh Earnest.

"What is clear from this incident is that a lot of innocent people have been killed, and it certainly is consistent with ISIL's strategy of wreaking havoc and sowing chaos and violence and sectarian tension," he said, using an acronym for the extremist group.

Earnest said al-Abadi has tried to unite Iraq against the threat.

"He has worked hard across sectarian lines to build diverse support for his government and for the effort to degrade and ultimately destroy ISIL," he said. "And that's why the United States has found Prime Minister Abadi and the Iraqi central government to be effective partners, and it's why we continue to stand with them as they confront this serious threat."

The militant group, which swept across Syria and northern and western Iraq in 2014, has been pushed back by government forces and U.S.-led airstrikes over the past year, losing more than 40 percent of the territory it held.

Although security has improved in Baghdad, Wednesday's violence again demonstrated its ability to launch devastating insurgent-style attacks across the country and in the heart of the capital. Back-to-back bombings on Feb. 28, also in Sadr City, killed 73 people.

"Politicians are fighting each other in parliament and government while the people are being killed every day," said Hussein Abdullah, an appliance store owner who suffered shrapnel wounds from the blast in Sadr City.

"If they can't protect us, then they have to let us do the job," said the 28-year-old father of two.

Months of protests and sit-ins led by influential Shiite cleric Muqtada al-Sadr have demanded the overhaul of the political system put in place by the United States following the 2003 overthrow of Saddam Hussein.

On April 30, hundreds of al-Sadr's supporters stormed the heavily fortified Green Zone in the heart of Baghdad and broke into the parliament building. The move was a dramatic show of power by al-Sadr that has further fractured Iraqi politics, delaying action on proposed reforms.

"All of these things distract from the fight against IS," said Matthew Henman, the head of IHS Jane's Terrorism and Insurgency Center. "The more the government is distracted with political upheaval, the more the Islamic State can capitalize on that lack of attention."

IS extremists still control significant areas in northern and western Iraq, including the second-largest city of Mosul. Commercial and public places in Shiite-dominated neighborhoods are among the most frequent targets for IS militants who want to undermine government efforts to maintain security in the capital.

As the extremist group continues to be pushed back in Anbar and Ninevah provinces, Henman expects attacks like Wednesday's bombings to increase in Baghdad and other territory far from the front-line fighting.

"Even if Mosul, Fallujah, Raqqa ... if all the major territory (the Islamic State group) holds is recaptured, the threat doesn't go away," he said.

According to the United Nations, at least 741 Iraqis were killed in April due to ongoing violence. The U.N. said 410 were civilians and the rest were members of the security forces. In March, 1,119 people were killed, it said.