SAN FRANCISCO - About two dozen boulders now sit along a half-block stretch of sidewalk on Clinton Park, a residential side street near Market and Dolores streets in San Francisco.

The boulders are meant as barriers to keep homeless people from camping out.

"Since the rocks, it has helped," said neighbor Ernesto Jerez.

The rocks are a frustrated neighborhood's attempt to do what police and City Hall haven't: to keep drug users from turning their street into a shooting gallery. 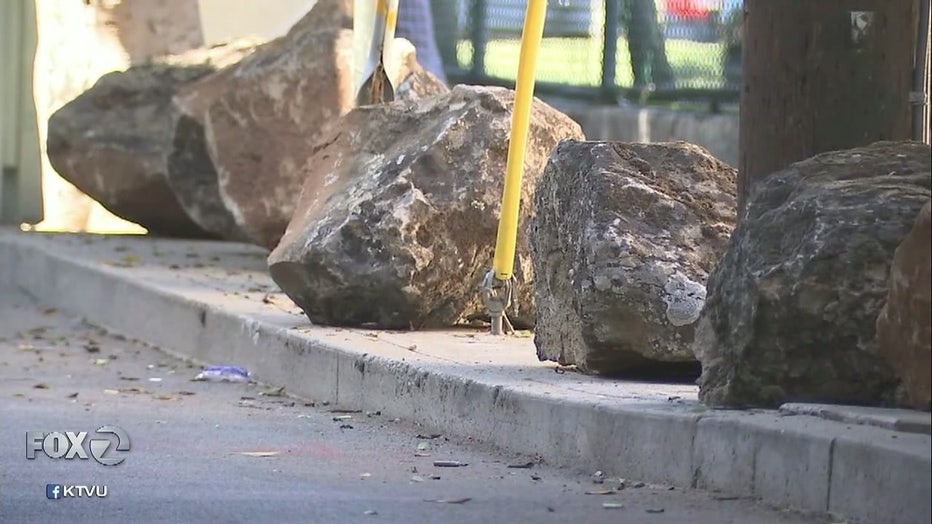 He told us his family received a letter from the neighborhood about a month ago addressing the sidewalk problem.

"A bunch of my neighbors, we all chipped in a few hundred dollars and I guess this is what they came up with," he said.

"There's actually a name for it. It's called anti-homeless architecture," said Jennifer Friedenbach, executive director of the Coalition On Homelessness.

Homeless advocates call it a cruel response and not a solution.

About two years ago Caltrans put rocks in an open space off Bayshore Boulevard to keep encampments away. Around that same time, the Eureka Valley-Harvey Milk Branch of the San Francisco Public Library in the same neighborhood was criticized for landscaping changes they made, which were called anti-homeless.

"We have 1,200 people on the waitlist for shelter. That's for tonight. People have nowhere to go," she said.

A San Francisco Public Works department spokeswoman said the city had no part in putting the boulders here.

She also said since the boulders aren't blocking the sidewalk, the city has no plans to remove them.

The neighbor said the rocks make less room on the sidewalk. Especially when some homeless people return at night and sleep on the ground behind the boulders.

"Someone sets up a tent. I'm stuck walking into the street. And if a car comes I can't quickly go onto the sidewalk because there is a rock there," he said.

"It's something. We've got to do something. I feel like there is nothing being done," said Jerez.

This story was originally reported in Hoodline.