CALISTOGA, Calif. - Thousands of Sonoma and Napa county residents have been told to flee their homes as the Glass Fire and smaller related fires have threatened homes and buildings for miles.

113 structures have been destroyed in the fire that grew more than 20,000 acres in about six hours. The damage has struck an inn and winery in the Napa Valley. Authorities speaking at a Sonoma County briefing feared there could be fatalities.

The Glass Fire ignited Sunday morning near St. Helena. The fire possibly sparked the Shady and Boysen fires which burst into view near the county line with Sonoma County. By Monday, the fires had merged into what Cal Fire calls the Glass Fire Incident.

The flames had destroyed 36,236 acres by Monday afternoon and there was no containment yet, according to Cal Fire. More than 8,500 structures remain under threat. The cause of the fire is unknown.

Santa Rosa Fire Chief Tony Gossner said there was loss of structures between Los Alamos and Oakmont on the north side of Highway 12 and in the community of Skyhawk. Cal Fire said crews were able to save more homes than what was lost. 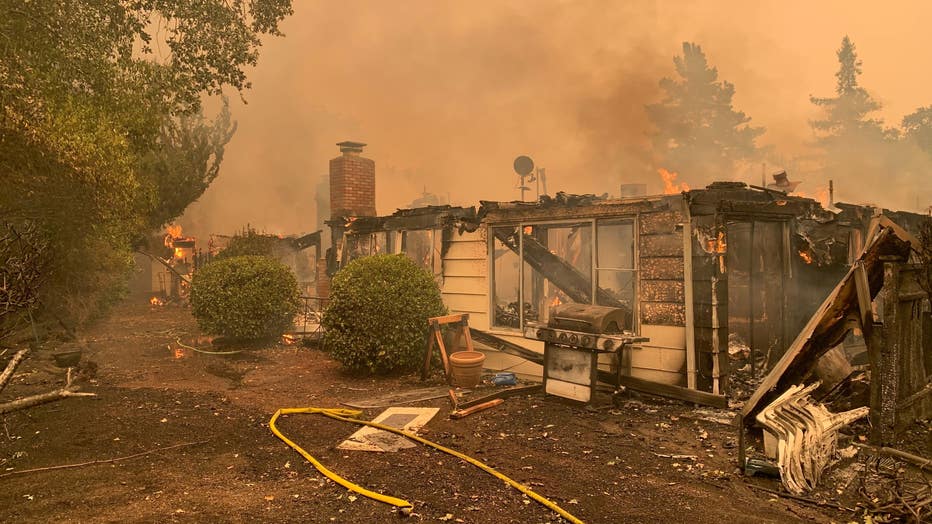 Residents from Santa Rosa, the entire city of Calistoga and smaller communities in Sonoma and Napa counties have been told to evacuate. For some residents, this was their second evacuation of the year after the large LNU fire started by lightning strikes this summer.

In Sonoma County alone, more than 68,000 people from unincorporated parts of the county and Santa Rosa have been ordered to evacuate, according to Sheriff Mark Essick. Roughly 11,600 people are under evacuation orders or warnings in Napa County. Click here for a list of evacuation orders and warnings.

"It's important to remember we're less than 24 hours into this fire and so far it's proven to be very fast moving and unpredictable," said Essick. "So please, heed the evacuation orders and follow the directions of the peace officers in your neighborhoods. They're there to lead you to safety."

Glass Fire grows more than 20,000 acres in about six hours

The Glass Fire had burned 36,236 acres in Napa and Sonoma counties as of Monday evening, according to a spokesman for Cal Fire.

Deputies from the Sonoma County sheriff's office were trying to force people to leave their homes Sunday night but encountered resistance in some cases from people refusing to scramble, according to the sheriff's office.

Sonoma County Sgt. Juan Valencia said there have been a few people who stayed behind and might have been burned in some areas.

The sheriff’s office also said a 17-year-old boy was arrested Monday near Maria Carrillo High School in Santa Rosa after he was seen jumping fences in an evacuated zone.

Pacific Gas and Electric said 37,000 customers were without power in the areas of the fire by Monday evening. In Napa County, there were 288 customers whose power had been intentionally cut as a public safety power shutoff while the rest were caused by fires.

All of St. Helena lost power overnight. The city's Mayor Geoff Ellsworth reminded residents to remain "calm, alert and responsive." Residents are encouraged to download the Everbridge mobile app, used by many public safety agencies, for the latest emergency updates. In case of a disruption to cell phone service in that area, residents can refer to the St. Helena Police Department, on 1480 Main Street, where the latest fire information will be posted. In addition, because of poor air quality, the police department is distributing N95 masks to the public on a first-come, first serve basis while the supply lasts.

The Marin-Sonoma Fairgrounds and Petaluma Veterans Building, which had been set up as evacuation centers, were at capacity and unable to accommodate people arriving Monday morning. The Sonoma Raceway, however, still had space to accept people looking for shelter.

The fire is known to have damaged properties in St. Helena, including the Glass Mountain Inn and Chateau Boswell Winery.

A KTVU photographer encountered significant damage to homes and buildings in the Oakmont area of Santa Rosa and along Highway 12.

Flames were also visible from a news helicopter inside Trionne-Annadel State Park in Sonoma.

Care at Adventist Hospital in St. Helena was suspended on Sunday. All patients were transferred elsewhere as a precaution.