Canadian health officials said Wednesday they have become the first to approve Pfizer’s COVID-19 vaccine for ages as young as 12.

Dr. Supriya Sharma, chief medical adviser at Health Canada, confirmed the decision for ages 12 to 15 and said it will help children return to a normal life. Canada is the first country to authorize Pfizer for that age group. The U.S. and the European Union are also reviewing it.

The vaccine was previously authorized for anyone 16 or older.

The U.S. Food and Drug Administration is also expected to authorize Pfizer’s vaccine for young people by next week, setting up shots for many before the beginning of the next school year. The announcement comes barely a month after the company found that its shot, which is already authorized for those age 16 and older, also provided protection for the younger group.

Pfizer in late March released preliminary results from a vaccine study of 2,260 U.S. volunteers ages 12 to 15 showing there were no cases of COVID-19 among fully vaccinated adolescents compared with 18 among those given dummy shots. 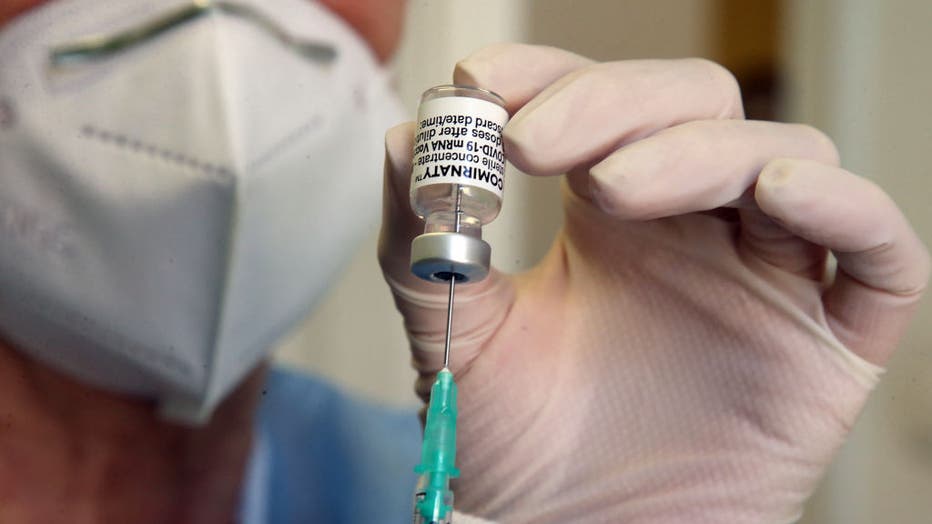 FILE - A doctor draws up a syringe with a COVID-19 vaccine in Berlin, Germany on May 5, 2021. (Photo by Wolfgang Kumm/picture alliance via Getty Images)

Sharma said the evidence is there that the vaccine is safe and effective in that age group. It is the first vaccine approved for children in Canada.

Sharma said about one-fifth of all cases of COVID-19 in Canada have occurred in children and teenagers, and having a vaccine for them is a critical part of Canada’s plan.

She said while most kids don’t experience serious illness from COVID-19, a vaccine also helps protect their friends and family who may be at higher risk of complications.

"It will also support the return to a more normal life for our children, who have had such a hard time over the past year,″ she said.

Kids studied had side effects similar to young adults, the company said, mainly pain, fever, chills and fatigue, particularly after the second dose. The study will continue to track participants for two years for more information about long-term protection and safety

"Today’s expansion of our authorization represents a significant step forward in helping the Canadian government broaden its vaccination program and begin to help protect adolescents before the start of the next school year," Fabien Paquette, vaccines lead for Pfizer Canada, said in a statement.

Health Canada said it will require Pfizer-BioNTech to continue providing information to it on the safety, efficacy and quality of the vaccine in this younger age group to ensure its benefits.

Vaccinations have ramped in Canada in recent months and the government expects to receive at least 10 million vaccines this month. More than 34% of Canadians have received at least one dose.

Officials are hoping that extending vaccinations to children will drive down caseloads even further and allow schools to reopen with minimal disruption this fall. It could also reassure parents and teachers alike.

"It's fantastic and unsurprising," Dr. Andrew Morris, a professor of infectious diseases at the University of Toronto and the medical director of the Antimicrobial Stewardship Program at Sinai-University Health Network, said of the new approval. "We need to get as many people as possible vaccinated as soon as possible. We know older kids are higher transmitters than younger, so this will help everyone."

The premier of the Canadian province of Alberta said it will begin inoculating those as young as 12 on Monday.