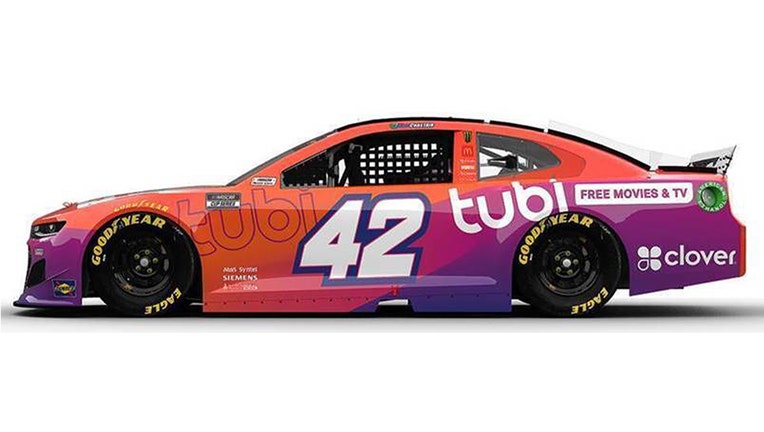 LOS ANGELES - Tubi, the largest online library of free TV and movies is partnering up with NASCAR.

It’s the first branded integration between the free streaming platform and the American auto racing empire.

The two entities kicked off their partnership with Chip Ganassi Racing (CGR) and the No. 42 team, led by driver Ross Chastain, in Atlanta on March, 21.

Tubi will also make an appearance on the No. 1 Chevrolet Camaro with former NASCAR Cup Series champion Kurt Busch, at Richmond Raceway on April, 17.

"We’re excited to make history with FOX as Tubi appears at its first NASCAR race," said Natalie Bastian, Vice President, Marketing at Tubi. "Our collaboration is a uniquely organic one, given both Tubi and NASCAR have such a massive and diverse audience and we’re thrilled that established drivers Ross Chastain and Kurt Busch will be in the driver’s seat, as well as Tubi Ambassador Erin Andrews being a Grand Marshal."

Ahead of the big race, get behind the driver's seat with these classics free to stream on Tubi.

Counting Cars (2013) - "A motor-revving series where a master car mechanic and his team restore, customize and sell cars in a scramble to keep their Las Vegas shop afloat."

The 900 Series (2020) - "Meet Las Vegas’ energetic 900 Series Motorsports team, as they fix up and race Porsches while discussing the lifestyle of the posh car community."

Scrapyard Supercar (2019) - "It’s a high-octane race to the finish as pro driver Shane Lynch and his team try to create a top-notch supercar out of everyday scrap materials."

Wreck Trek (2013) - "Junkyard wrecks are fixed up for an epic journey across Africa, where thrill-seeking drivers face harsh terrain and dicey situations."

Racing Dreams (2014) - "Behind the scenes of the teens chasing the World Karting Association youth racing title and their shared dream of a future competing at NASCAR."

Tuner Transformation (2019) - "Lucky viewers get an overhaul of their cars, from imports and domestics to street racing cars, by a team of expert tuners who meet every challenge."

Racing Years (2010) - "Feel the excitement, victory, and devastation of motor racing’s epic history and modern adventures. What are the sport’s milestones?"