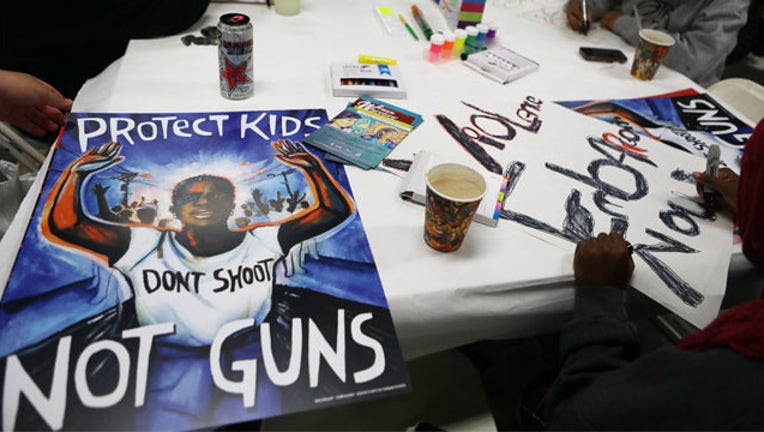 Activists paint signs to be carried at the March for Our Lives on March 22, 2018. The marches have been organized by students from Marjory Stoneman Douglas High School where 17 people were killed in a mass shooting. (Photo by Mario Tama/Getty)

AUSTIN, Texas - Rallies are being held across the country on Saturday in a nation-wide event March for Our Lives.

March for Our Lives is intended to protest gun violence and request lawmakers reform gun laws in response to the February mass shooting at Marjory Stoneman Douglas High School in Parkland, Florida where 17 people were killed. The march, according the event's website, is "to demand that their lives and safety become a priority and that we end gun violence and mass shootings in our schools today."

Here in Central Texas, there are planned marches for Austin, Pflugerville, Round Rock and New Braunfels, according to the event's website.

The march in Austin is set to begin at noon and start at Austin City Hall. It will head to the Texas State Capitol. City and state leaders, as well as survivors from Marjory Stoneman Douglas High School and Sandy Hook are expected to speak.

Over 10,000 people are expected to attend Austin's march, according event organizers.

Lyft announced they will offer free rides to people wishing to attend the March for Our Lives in Austin with a code.

For information about other local marches head here.