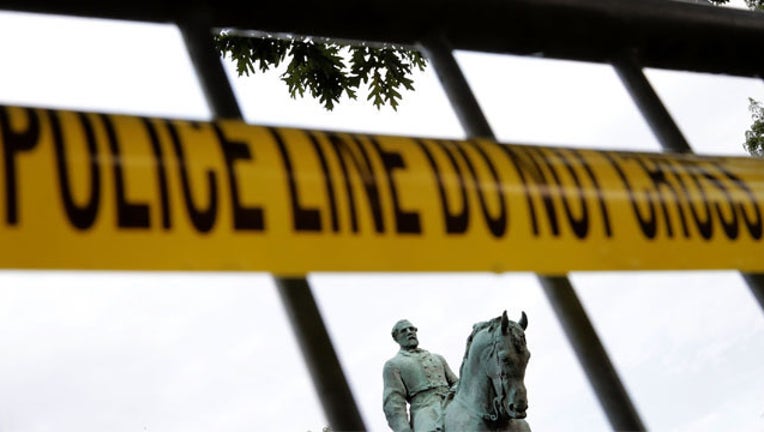 RICHMOND, Va. (AP) - The mayor of Charlottesville on Friday called for an emergency meeting of state lawmakers to confirm the city's right to remove a statue of Confederate Gen. Robert E. Lee, a request that was swiftly rejected by the state's governor.

Mayor Mike Signer said recent clashes over race and the Confederacy had turned "equestrian statues into lightning rods" and urged Democratic Gov. Terry McAuliffe to convene a special session of the General Assembly.

Signer's statement came nearly a week after white supremacists descended on the city and violently clashed with counter protesters. One woman was killed Saturday when a car plowed into a crowd of people there to condemn what is believed to be the largest gathering of white supremacists in a decade.

"We can, and we must, respond by denying the Nazis and the KKK and the so-called alt-right the twisted totem they seek," Signer said in a statement.

Charlottesville's plans to remove the statue are in the midst of a legal challenge. A law passed in 1998 forbids local governments from removing or damaging war monuments, but there remains legal ambiguity about whether that applies to statues erected before the law was passed.

McAuliffe spokesman Brian Coy said the governor won't call a special session while the issue is being decided in court.

"The governor hopes the court will rule in the city's favor soon and encourages Mayor Signer to focus on that important litigation rather than a redundant emergency session," Coy said.

McAuliffe did sign an executive order Friday afternoon temporarily banning any public demonstrations at a monument in Richmond. Unlike the Charlottesville statue that sits in a city park, the Richmond monument to Lee is in the middle of a traffic circle on Monument Avenue, an iconic boulevard with heavy traffic.

Also Friday, the mother of a woman who was killed while protesting the rally said that she won't talk to President Donald Trump because of comments he made after her daughter's death.

Speaking on ABC's "Good Morning America," Susan Bro said she initially missed the first few calls to her from the White House. But she said "now I will not" talk to the president after a news conference in which Trump equated violence by white supremacists at the rally with violence by those protesting the rally.

Bro's daughter, 32-year-old Heather Heyer, was killed and 19 others were injured when the driver rammed a car into a crowd of demonstrators. An Ohio man, James Alex Fields Jr., has been arrested and charged with murder and other offenses. Charlottesville Police announced five more felony charges - two counts of malicious wounding and three counts of aggravated malicious wounding - against Fields Friday afternoon.

In the hours after Heyer's death, Trump drew criticism when he addressed the violence in broad strokes, saying he condemned "in the strongest possible terms this egregious display of hatred, bigotry and violence on many sides, on many sides."

Pressured by advisers, the president had softened his words on the dispute Monday but returned to his combative stance Tuesday - insisting during an unexpected and contentious news conference at Trump Tower that "both sides" were to blame.

"You can't wash this one away by shaking my hand and saying 'I'm sorry,'" Bro said of the president. She also advised Trump to "think before you speak."