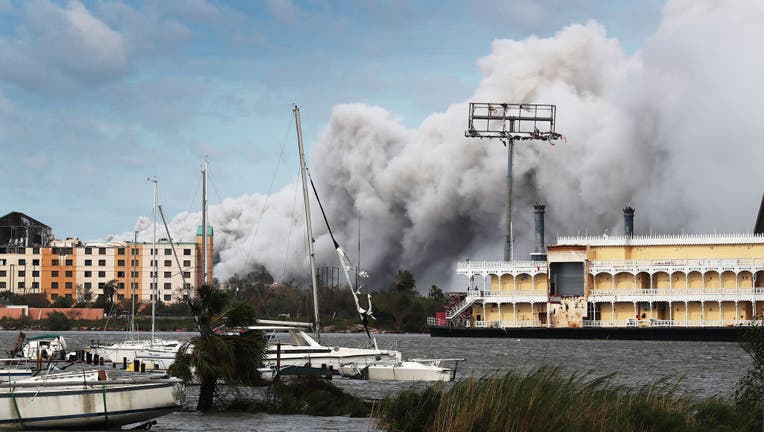 LAKE CHARLES, LOUISIANA - AUGUST 27: Smoke is seen rising from what is reported to be a chemical plant fire after Hurricane Laura passed through the area on August 27, 2020 in Lake Charles, Louisiana . The hurricane hit with powerful winds causing ex (Photo by Joe Raedle/Getty Images)

LAKE CHARLES, La. - A fire at a Louisiana chlorine plant erupted with thick, billowing smoke Thursday after Hurricane Laura plowed through part of the country’s petrochemical corridor with storm surges and fierce wind, forcing residents around the plant to shelter in their homes.

RELATED: Once a Category 4 hurricane, Laura weakens to tropical storm over Louisiana

Authorities ordered people around the plant in the heavily industrialized Lake Charles area to stay in their homes after the blaze was discovered at daylight, after the storm pushed through. The state Department of Transportation closed Interstate 10 in the area, diverting traffic.

The fire sent black smoke billowing high above an interstate overpass. Officials told people nearby to stay indoors, with windows and doors shut.

State police, firefighters and other emergency workers were responding, and an Environmental Protection Agency plane was monitoring overhead, Langley said.

Storm damage meant crews had difficulty clearing downed utility equipment and trees and other wreckage to reach the site.

“Finding a way into it was a bit of a challenge, but they got there,” Langley said.

When cleared by aviation officials, state environmental officials will fly over the storm area to look for signs of any other industry fires or leaks, he said.

“We’ll be doing flyovers, looking for sheens on the water, any little thing we can see — orphan drums, things like that.”