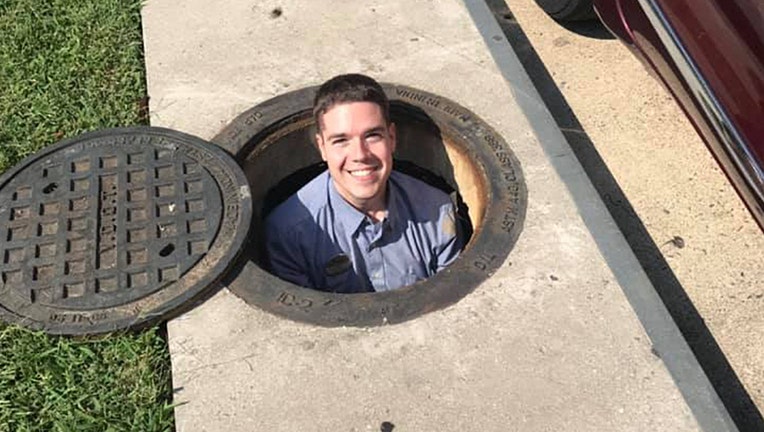 STAFFORD, Va. (FOX 5 DC) - A Chick-fil-A employee who was off the clock did not hesitate to help a customer having a bad day.

Earlier this week, Shauna Hall visited the fast-food restaurant in Stafford, Virginia and as she was getting her son out of the car accidentally drops her iPhone into a storm drain.

Hall goes on to say the phone was just recently paid off and no more than two days ago, she had just bought a new Otterbox for it.

“After a moment of losing my freakin[g] mind, I lay on the ground, placing my head best I can between my van and the drain, looking into the dark abyss to see if by any chance it has landed somewhere I can reach.” She wrote, “Of course it has not.”

In utter disbelief, as she is about to “puke and cry,” she goes into the restaurant to ask for the manager’s help.

RELATED: Chick-fil-A employee hailed a hero for saving a man's life: 'God placed me' there

Hall said, “The manager comes over to talk to me and is very friendly but unsure how to help. Just then another employee behind her says he is going to grab a grab-stick and a mirror to try and help.”

Once they are outside, the employee-- whose name is Seth—gets down on the ground in an attempt to retrieve the phone but has no luck.

They head back inside where Hall finds a table as her son is hungry at this point. Shortly after, Seth walks over with their ticket order and says their mobile dine-in order was refunded .

Thanking him I tell him he didn’t have to do that, but he tells me it was no problem as I’m clearly already having a bad day.

At this point, Seth is on a mission to save the phone, so he proceeds to call the county for assistance at no avail. According to Hall’s post, they hung up on him.

They make their way back out and decide to call the iPhone to see if they can hear it. That is when Seth sees the manhole cover over the drain, and notices that it's not bolted shut.

In an attempt to lift the heavy lid, Seth cuts his finger and after quickly cleaning the wound, spots the phone at the very bottom of the drain.

They first attempt to retrieve it with a grab-stick but have zero success. That’s when Seth decides to climb down, and finally digs out the phone which was miraculously not broken or wet.

“I was so thankful I freaking hugged him. Not only did he slice his finger and was filthy from laying on the ground and climbing in the hole, I find out he had actually just gotten off shift and was still willing to help me.”

Just another day at Chick-fil-A!