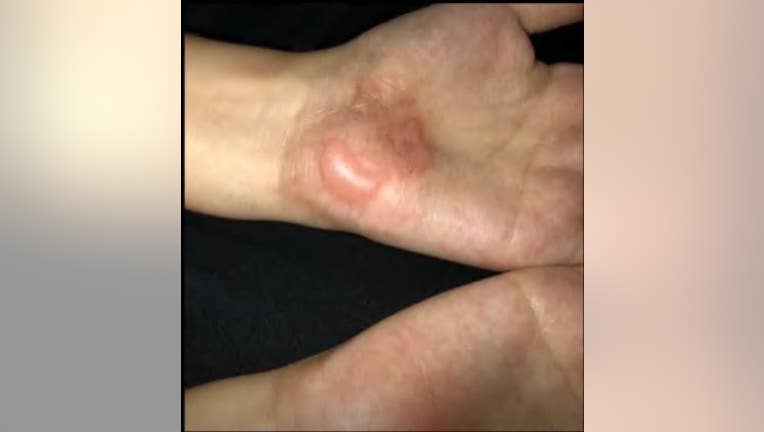 CHANNELVIEW, Texas - Some kids in Channelview ended up in the emergency room after getting burned during gym class. Parents there say their children were injured as a result of a P.E. teacher forcing them to exercise on the hot ground outside on Monday as a form of punishment.

It started when, in temperatures above 90-degrees, some kids at Anthony Aguirre Junior High tried to get out of running laps outside during Physical Education class, but they say when the gym teacher caught them, they got in trouble, and what they say the teacher did to discipline them caused serious burns.

"I’m just heartbroken for my son, you know," Wendy Alvarez said after showing us pictures of blisters that popped up after her son suffered burns on the hot track at Aguirre Jr. High School during PE class.

"My son he has nose bleeds and things, so he didn’t want to run it was too hot. Him and four other kids, they went, and they were hiding behind the bleachers. The coach found them and I guess punished them by making them do bear crawls." Alvarez explains.

With the track surface warmed by a heat index of 102 degrees in the Houston heat, Alvarez says the boys were made to do an exercise which called for them to get down on all fours on the scorching track, crawling on their hands and feet as punishment.

"Now his hands are burnt. He has second degree burns. I took him to the ER yesterday. He said my hands feel like they’re on fire. He had fever last night," Alvarez adds.

According to this doctor’s report, the 7th grader suffered second degree burns on both hands.

"To me, that’s torture," Alvarez chokes back tears and says she contacted another mother whose son was injured. "And she sent me pictures of her son too. He also has blisters on both hands."

The mom’s met with school officials and Alvarez says they did say they’re sorry.

"And they said we promise this is not going to happen again, but I’m not really happy with that answer. I think he should get fired, honestly. That’s how I feel. I don’t think somebody like that should be working with kids."

Right after Alvarez spoke with us, she was headed to take her son to Shriner’s Burn Center in Galveston at the emergency room doctor’s recommendation.

Channelview ISD sent the following statement:
"Channelview ISD administrators are aware of an incident that occurred at Anthony Aguirre Junior High on Monday, May 9 where a teacher allegedly disciplined four students causing non-life threatening heat related injuries due to the conditions outside.This incident is currently under investigation to ensure all students have a safe learning environment. The teacher has been removed from the classroom and placed on administrative leave pending the outcome of the investigation. Channelview ISD does not condone aversive discipline techniques that may cause physical pain to a student in any way. We take these situations very seriously as the safety of our students is always our top priority."