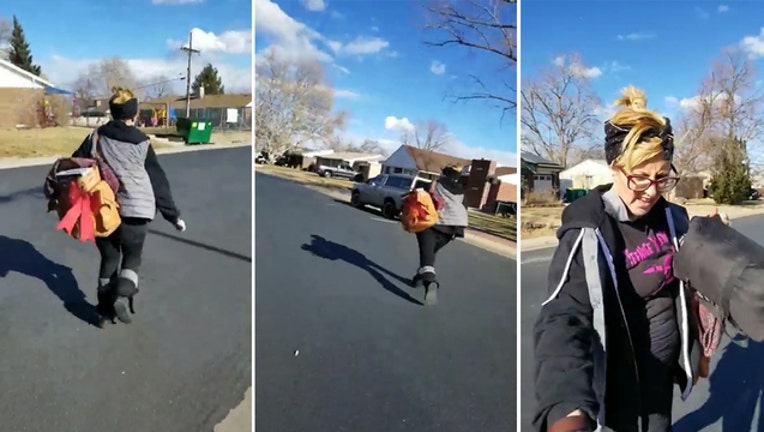 LAKEWOOD, Colo. (KDVR/FOX 13) - Porch pirates are a common trend during the holidays, but one Colorado woman took matters into her own hands and refused to become a victim.

Renee Abeyta was at her Lakewood home doing chores Wednesday afternoon when she received a notification from her Ring home surveillance system that someone was at her front door. She looked but didn't see anyone. Then, she searched through the recordings her camera captured, and saw an unknown woman grab a package from the front porch, and walk away.

Abeyta walked outside and yelled, “Hey!” as she saw the woman crossing the street.

“I thought, ‘No way this is happening to me,’” she explained to KDVR. She ended up confronting the woman and captured it all on cell phone video. Abeyta asked the alleged porch pirate for her name and if she stole something.

“Give it! I’m gonna (expletive) call the police! I got you on camera (expletive),” Abeyta is heard saying on video.

“Leave me alone lady. I didn’t take anything.”

Abeyta ended up chasing her down for about a minute, yelling -- along with a string of some expletives-- before the suspect finally stopped in her tracks. The suspect handed the stolen package -- which contained a Crock Pot cover -- to Abeyta.

Abeyta hopes that the woman doesn’t do it again. She shared video of the confrontation on her Facebook page. She explained that she couldn't believe she went after the woman, but also felt that the suspect shouldn't get away with it in the middle of the day.

“Hopefully, that girl and other people don’t steal stuff,” she said, “because it’s Christmas and, I mean, these are presents for people.”

Watch full video below. Please be aware, it contains profanity.