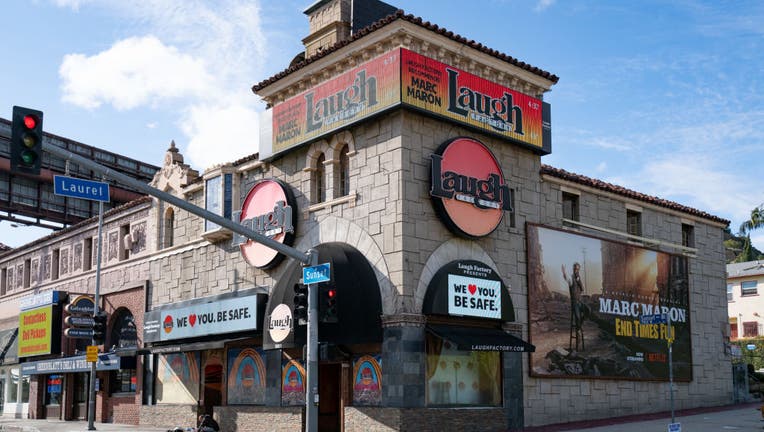 A general view of the Laugh Factory on the Sunset Strip after Los Angeles ordered the closure of all bars and entertainment venues and hours before the 'Safer at Home' emergency order was issued by L.A. authorities amid the ongoing threat of the coro

LOS ANGELES - Whenever she’s down, Tiffany Haddish says she finds a good joke can bring her right back up.

That’s why the popular star of TV, film and stand-up decided to crack wise about ways to survive in the year of coronavirus in a nearly empty room recently while dressed in a bright orange pantsuit, protective gloves and armed with a can of Lysol.

“You told me you loved me, then bring me some groceries. I’m down to my last roll of T.P.,” she sang as she opened her act with a raucous tune she said she'd written just the day before to sum up what weeks of self-isolation has been like.

Haddish was performing at the venerable Los Angeles club the Laugh Factory, where she got her start as part of a kids’ comedy camp more than 20 years ago. No one was in the audience on that weekday afternoon, except four people including a guy videoing the show.

But people perched in front of laptops all around the world could tune in and many provided virtual LOLs while the cameraman chuckled in the background. Fellow comic Craig Robinson, dressed in protective gloves and a mask, accompanied her on piano and sometimes played straight man.

With comedy clubs from California to New York dark due to social-distancing mandates, comedians are finding ways to keep bringing the laughs to the public.

In New York, members of the Magnet Theater ’s popular improv groups gather each night through the magic of Zoom to put on shows from their homes while audiences tune in through the platform Twitch.

The theater sells virtual tickets to its several shows a week, as do some other venues scattered around the country.

But people who can't afford a ticket to a Magnet show don't have to pay. They can throw a couple bucks into the virtual “busker's hat” afterward. A recent performance drew 250 viewers, far more than the 70 who could have squeezed into the small theater.

“So we blew right past capacity,” laughed improviser and improv teacher Elana Fishbein.

The troupes can't can't see the audience. That's not so much a problem for a make-it-up-as-you-go-along group that's worked together for some time, Fishbein says. But it's taken some stand-ups a period of adjustment.

“It is tough to perform in your living room in front of nobody,” acknowledges comic Will C, speaking by phone from the living room of his Kansas City, Missouri, home. “All I get is my wife walking by me, rolling her eyes and shaking her head.”

Veteran stand-up comic Bob Zany said he still sometimes pauses during the moments where the laughs — or sometimes the hoots of derision — are supposed to be.

It also reminds him of starting out on the stand-up circuit 40 years ago.

Tom Hanks surprised an Australian boy after the boy reached out to express his concern about the actor's recent bout with coronavirus, but also mentioned how he was bullied because his name is Corona, a report said Thursday.

“In the old days I'd do spots like at the Improv at 1:40 in the morning to two people. And they were passed out drunk," he recalls with a laugh. "So what's the difference?”

As he waits to resume things, Zany drove from his home in Las Vegas to Los Angeles one recent day to do an hour at the Laugh Factory.

As to what's the attraction — the comics are being paid little to nothing — most echo the words of Haddish.

“I find whenever I’m feeling down, a good laugh really changes everything and makes me feel better. A lot of people are down and depressed right now and maybe I can inspire a little laughter in them,” she said after spending an hour performing in front of a microphone, which she had generously doused in Lysol.

Laugh Factory owner Jamie Masada started streaming live comedy shows Monday through Friday afternoons shortly after California ordered all non-essential businesses closed. It was partly a response, he said, to club regulars who complained they’d would be left with nothing to do sitting at home, and to comics who suddenly saw most of their income vanish.

He limits the gathering to no more than five, including the people on stage and a person behind the camera. He's paying performers $500 an appearance and says some who don't need the money are donating to charity.

“We are taking a big financial hit," he said. “I'm even thinking of going and getting a small-business loan.”

The comics are taking a big hit too.

Zany has gigs at casinos and clubs across the country booked through the summer but as to whether he'll get to do them, he says, “Your guess is as good as mine.”

Woman pranks her family by swapping portraits with crayon drawings

“Like a lot of other people I’ve been feeling the impact on the amount of work I have to do,” Kristen Vogler said. “However, on the bright side, that gave me the free time I needed to pull off the prank.”

Will C has been traveling the country the past six years with the troupe Veterans of Comedy when not visiting Los Angeles for frequent guest roles in sitcoms and the occasional movie. All that's on hold now as he does his shows from his living room in Missouri.

Ironically, he had just partnered with the non-profit Mission Warriors to put on a weekly “Couch Comedy Club” show on its Facebook page that was aimed at both providing entertainment to current and ex-military as well as helping them overcome PTSD and other trauma. Now it's been opened to everybody and he has launched a nightly talk show called “ Broken Zzzzs " that pulls in hundreds of viewers.

Neither brings in any money. But Will C is ok with that. Other people are hurting too, he says, and if he can give them a few minutes of laughter every night, it's worth it.

“If you love the art of comedy you just want to do it," he says, “Not because you want to get paid.”