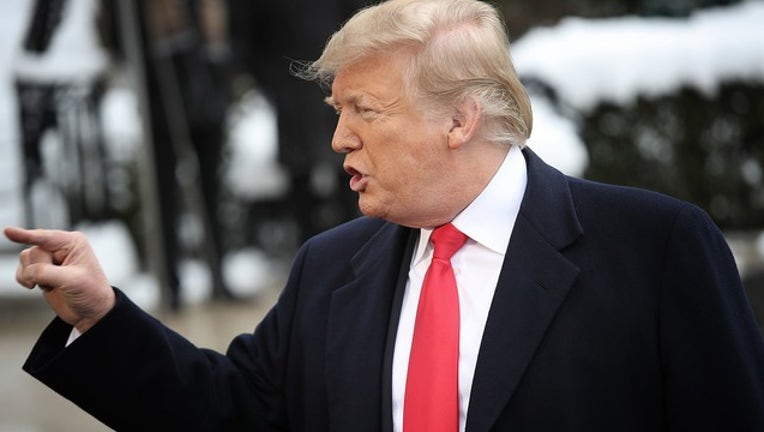 WASHINGTON (AP) - Staring down the next deadline to pay federal workers, the White House shifted tactics, trying to bypass House Speaker Nancy Pelosi to negotiate with rank-and-file lawmakers even as President Donald Trump dug in for a prolonged shutdown.

The House and Senate announced Tuesday they would stay in session, canceling an upcoming recess week at home if the shutdown continued, which seemed likely. On the shutdown's 25th day Tuesday, Trump did not move off his demand to have Congress provide $5.7 billion to build his promised border wall with Mexico. Democrats say they will discuss border security once the government has reopened, but Pelosi is refusing money for the wall they view as ineffective and immoral.

The president, on a conference call with supporters, showed no signs of backing down.

With some 800,000 federal employees furloughed or working without pay, Trump suggested the partial shutdown, which has clogged airport security lines and shuttered federal agencies, was going smoothly.

"People are very impressed with how well government is working with the circumstances that we're under," Trump said.

Behind the scenes, though, the administration - and its allies on Capitol Hill - are warily eyeing the next payday, hoping to reach a resolution before next week's Tuesday deadline, when they'll need to prepare the next round of paychecks for workers who have been seeing zeros on their pay slips.

"There is definitely a sense that there is a deadline approaching, which would be next Tuesday, to make sure that we're able to solve this problem," said Mercedes Schlapp, a White House spokeswoman.

Tuesday brought another day of high theatrics, but low substance, as the shutdown dragged into its fourth week. The shutdown, already the longest ever, entered its 26th day Wednesday. The previous longest was 21 days in 1995-96, when Bill Clinton was president.

Trump, who a week ago seemed intent on declaring a national emergency in order to build the wall, has turned his attention back to Congress as polling shows he is taking much of the blame for the standoff.

The White House invited rank-and-file lawmakers to lunch with Trump at the White House as part of a strategy to build support from centrist Democrats and newly elected freshmen, including those from areas where the president is popular with voters.

But the White House quickly learned the limits of that approach. None of the House Democrats took Trump up on the offer.

One, Rep. Lou Correa, D-Calif., "welcomes the opportunity to talk with the President about border security," his spokesman said, "as soon as the government is reopened."

Trump ended up lunching with a handful of lesser-known House Republicans. The White House will try again later this week, inviting a bipartisan group of lawmakers known as the Problem Solvers caucus to talks.

A short time later, a group of House Democrats made its way to Senate Majority Leader Mitch McConnell's office demanding that he consider House-passed bills to fund the government. McConnell was not in his office at the time, so the Democrats left a note.

McConnell says he doesn't want to waste the Senate's time and will only bring up measures that Trump will sign into law. Democrats, he said, have turned Trump's wall into "something evil" and it's time to get the country off the "political carousel" of the shutdown fight.

Republicans complain that Democrats are the ones who are refusing to budge, and they say it's up to Pelosi to bring Trump a new offer.

"The president - who is not well-known for flexibility - has been more flexible than the other side," said Sen. Roy Blunt of Missouri, a member of GOP leadership.

Meanwhile, the effects of the partial government closure intensified around the country, with workers facing deepening anxieties about mortgage payments and unpaid bills.

Some lawmakers are reluctant to return home for next week's planned recess - some were planning their first town halls of the new year - as the standoff deepens. JPMorgan's Jamie Dimon told reporters Tuesday that he expects U.S. economic growth to slow to nothing this quarter if the government shutdown continues.

"I hope it doesn't go to the end of the week," said Sen. John Thune of South Dakota, the No. 2 Senate Republican. "I'd like to see us have a breakthrough here."

But hopes of side deals being cut by the White House seemed unlikely, as did the prospect of groups of senators meeting privately to forge a compromise.

Said Sen. Chris Coons, D-Del., "The shutdown will eventually take us to a place where the average American is angry at and sick of all of us."

Even though Trump is focused on pushing Democrats to return to the negotiating table, it was the president who walked out of the most recent talks last week after Pelosi told him she would not yield to his demands.

As the White House invited lawmakers to lunch Tuesday, Pelosi gave her blessing for lawmakers to attend. She told her team that the group can see what she and others have been dealing with in trying to negotiate with Trump.

Pelosi predicted that after meeting with Trump, the lawmakers would want to make a "citizen's arrest," according to an aide, who wasn't authorized to publicly discuss the meeting and spoke on condition of anonymity.

Rep. Jim Himes of Connecticut, another centrist Democrat, said the White House is "grasping at straws."

For AP's complete coverage of the U.S. government shutdown: https://apnews.com/GovernmentShutdown