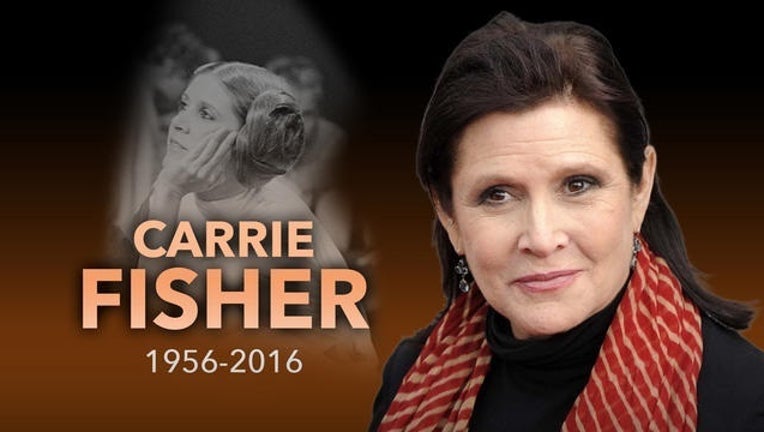 LOS ANGELES (AP) - Carrie Fisher's autopsy report shows the actress had cocaine in her system when she fell ill on a plane last year, but investigators could not determine what impact the cocaine and other drugs found in her system had on her death.

The report released Monday states Fisher may have taken cocaine three days before the Dec. 23 flight on which she became ill. She died four days later.

It also found traces of heroin and MDMA, which is also known as ecstasy, but that they could not determine when Fisher had taken those drugs. The findings were based on toxicology screenings done on samples taken when the "Star Wars" actress arrived at a Los Angeles hospital.

Coroner's officials ruled Fisher died from sleep apnea and a combination of other factors. A news release issued Friday mentioned drugs were found in Fisher's system, but it did not provide details.

Monday's full report contains a detailed explanation of the results, such as why investigators believe Fisher took cocaine at least three days before her flight.

"At this time the significance of cocaine cannot be established in this case," the report states.

It also states that while heroin is detectable in the system for a briefer period of time, investigators could not determine when Fisher took it or the ecstasy.

"Ms. Fisher suffered what appeared to be a cardiac arrest on the airplane accompanied by vomiting and with a history of sleep apnea. Based on the available toxicological information, we cannot establish the significance of the multiple substances that were detected in Ms. Fisher's blood and tissue, with regard to the cause of death," the report states.

Among the factors that contributed to Fisher's death was buildup of fatty tissue in the walls of her arteries, the coroner's office said last week.

A phone message left for Fisher's brother, Todd, was not immediately returned.

Todd Fisher said Friday he was not surprised that drugs may have contributed to his sister's death.

"I would tell you, from my perspective that there's certainly no news that Carrie did drugs," Todd Fisher said. He noted that his sister wrote extensively about her drug use, and that many of the drugs she took were prescribed by doctors to try to treat her mental health conditions.

Fisher long battled drug addiction and mental illness. She said she smoked pot at 13, used LSD by 21 and was diagnosed with bipolar disorder at 24. She was treated with electroshock therapy and medication.

"I am not shocked that part of her health was affected by drugs," Todd Fisher said.

He said his sister's heart condition was probably worsened by her smoking habit, as well as the medications she took. "If you want to know what killed her, it's all of it," he said.