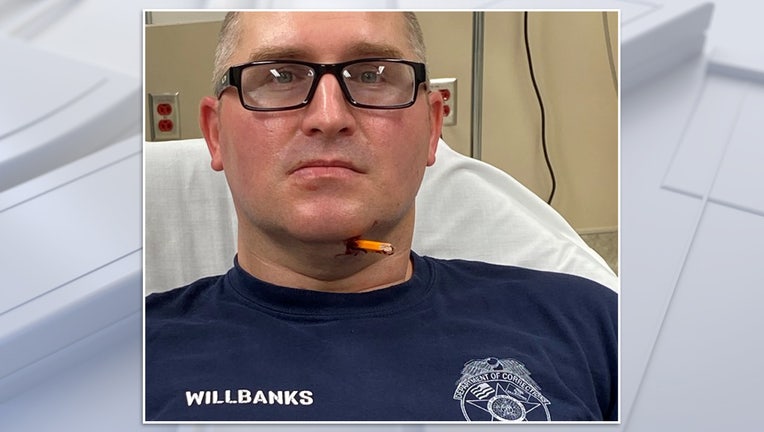 MCALESTER, Okla. - An officer with the Oklahoma Department of Corrections will receive several prestigious awards after surviving a brutal attack from an inmate.

Sgt. Dustin Willbanks was awarded the 2021 Oklahoma Department of Corrections (ODOC) Medal of Valor Award. The National American Association of Wardens & Superintendents will also present Willbanks the Medal of Valor award later this month during an annual conference in San Antonio, Texas.

Authorities said on Oct. 8, 2021, Willbanks was working his normal shift at the Oklahoma State Penitentiary when he was attacked by an inmate.

Willbanks and his partner were escorting the inmate to the shower when the handcuffed inmate was able to grab a pencil and stab Willbanks in his neck.

"It went in straight through the front and right back," Willbanks said in a news release. "It missed my esophagus by one-eighth of an inch."

The ODOC released a picture to the media showing the pencil lodged into Willbanks’ throat.

After getting impaled with the pencil, authorities said Willbanks and his partner, Sgt. Mandi Morgan, were still able to subdue the inmate before others were possibly injured. Willbanks then walked himself to the OSP infirmary to be transported to a local hospital and receive medical care.

"Even after being attacked, Sgt. Willbanks used his training and dedication to subdue and control the inmate," Jason Bryant, ODOC’s Chief Administrator of Institutions said. "Willbanks embodies the definition of what we expect in a correctional officer— good judgment, resourceful, professional, and self-disciplined."

"Even more remarkable, he returned to regular duty within a week," OSP Warden Jim Farris said. "The eagerness to resume his responsibilities so soon after the attack is commendable."

More honors are also coming to Willbanks as he will receive the One Voice United Medal of Honor in Washington, D.C., at a banquet set to take place during May’s Law Enforcement Week. He will then receive another award in June from the Correctional Peace Officers Foundation during its luncheon in Reno, Nevada.

"Every day, correctional officers across the state do heroic work, whether it be through changing the life of an inmate with their professionalism and compassion or by protecting their fellow officers and other inmates," said ODOC Director Scott Crow. "Sgt. Willbanks embodies everything we hope to find in a correctional officer. His selflessness and dedication to his profession were on full display that day. We’re extremely thankful for his rapid recovery and proud to see his heroism be recognized across the country."