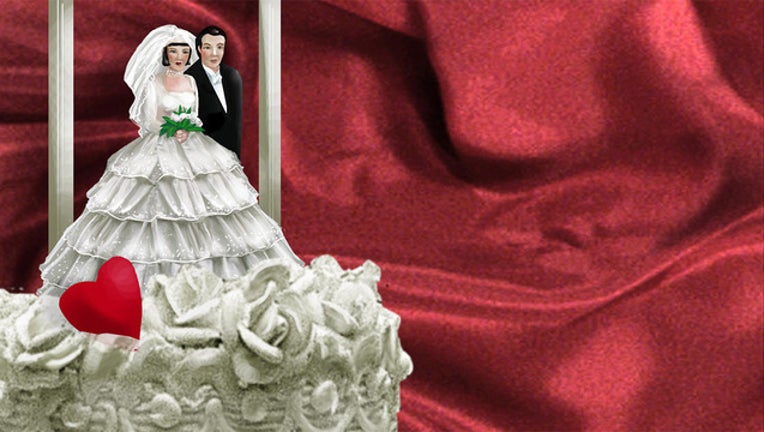 Because after raising three kids in Newark and more than half a century together, nobody can find their original marriage license.  Not them. Not the small town of Elmer, New Jersey, where they married. Not Salem County, where Elmer is located. And not the state of New Jersey.

"A very careful and exhaustive search failed to reveal any record of (the marriage)," a letter from the state of New Jersey Department of Health and Senior Services told them. "This means (1) the event did not happen in the year stated by you, (2) the report was made under an entirely different name, or (3) the person who should have filed the report failed to do so."

The Morrisons have highlighted that last phrase in yellow, because they think that's what happened.

So on a recent Saturday, the couple planned to exchange vows again, but this time in a double ceremony with their son and his longtime girlfriend.

"Every wedding I go to," Betty Jean said, "I say 'Don't take nothing for granted. Make sure everything is mailed where it has to go.'"

They thought they had finalized that most important detail of getting a marriage license three days before their Sept. 21, 1957, wedding.

A friend in Elmer, Betty Jean's hometown, referred them to a resident who was a notary. They went to his house after work, where they had witnesses and signed the needed paperwork.

The man, who was in his 90s, said he would take care of the rest.

Betty Jean wore a ballerina length wedding dress, which had a mandarin collar and long sleeves - just like Grace Kelly's. Charles wore a tux with a bow tie. They exchanged traditional vows. The wedding was featured in the local paper.

Soon after, the newlyweds moved to Newark, where he worked at Chrysler and as a volunteer fireman. With their little piece of the American Dream, they lived in the same house for 60 years, always had a dog and owned a vacation house in Ocean City, Maryland.

The Morrisons first realized there was a problem in 1999 when Betty Jean planned to cash in on a small pension she earned from her work with the Christiana Fire Co. Ladies Auxiliary. Among the paperwork she needed to provide was a copy of her marriage license.

But she couldn't find it.

She wrote to the Salem County Clerk in New Jersey. No one could find it. She called Elmer's City Hall. That office couldn't find it either, despite the receptionist doublechecking the town's basement archives.

Finally, they approached the state, which spent six months looking before sending them the letter.

"Since it took so long, I figured something was wrong," Betty Jean said.

The couple believes the notary whose house they went to before their wedding never sent in the license. Now thinking about it, they aren't entirely sure why they went to him in the first place.

"I don't know why somebody told me to go there," Betty Jean said.

The news never shook the Morrisons, though. They knew they were married and are proud that they've been together for more than 60 years. Betty Jean and Charles attribute the longevity of their marriage to having respect for one another.

"We've never had an argument. We had some disagreements now and then," Charles said. "Of course, I'm old school. When I was young, when you got married you stayed married."

But the lack of a license has left the couple with no legal proof they are married. Since they're getting older, they need proof of their marriage in case "something happens," Charles said.

Although the Morrisons have been thinking about getting married again for years now, they decided to do something about it this year.

This weekend, a day after their 61st wedding anniversary, the couple will remarry at The Wellwood Club in Charlestown, Maryland. At the same time, their son Chuck will marry his longtime girlfriend Angela Patten.

Patten and Chuck have been dating for the past 20 years.

When their son Chuck heard his parents talking about a potential wedding, he thought "My parents are doing it, why not me?" said Angela Patten, the Morrison's soon-to-be daughter-in-law.

She and Church are basically a married couple, she said. They have grown up together, have paid bills together and have owned houses together.

"The only thing we don't have is a marriage license," she said. "At this point, Chuckie is 51 and I'm 49. It doesn't really matter. I just want to get it done and official. I'm not one of those materialistic girls."

Patten sees a lot of Chuck in Charles. Both men are hardworking and honest "as the day is long." The Morrisons have showed her that though every relationship has "ups and downs, but you can work it out."

She doesn't mind sharing her wedding day with Betty Jean and Charles. Both couples will be standing at the altar together. They'll exchange vows at the same time.

"We look at it this way: This will be like the one last hurrah," Patten said.

On Saturday, Betty Jean will wear a long navy dress, Charles will wear a navy suit. A grandson will walk the bride down the aisle and her grandchildren will serve as witnesses. They'll exchange traditional vows.

And this time, the Morrisons will make sure to follow up on that marriage license.