The coyote snuck onto the grounds of Mission Middle School Monday morning before classes and was quickly captured and released.

RIVERSIDE, Calif. - A coyote snuck into the bathroom of a Riverside middle school Monday morning, and its capture and release were caught on video.

Riverside County Animal Services received calls from Mission Middle School shortly before 9 a.m. about the animal. When the officer got there, staff members told him that they'd seen the coyote nearby over the past few weeks, but it had never gotten on campus.

When workers at the school saw the coyote — who they named "Wile E." — on campus Monday morning, it got scared and scurried into one of the school's bathrooms. 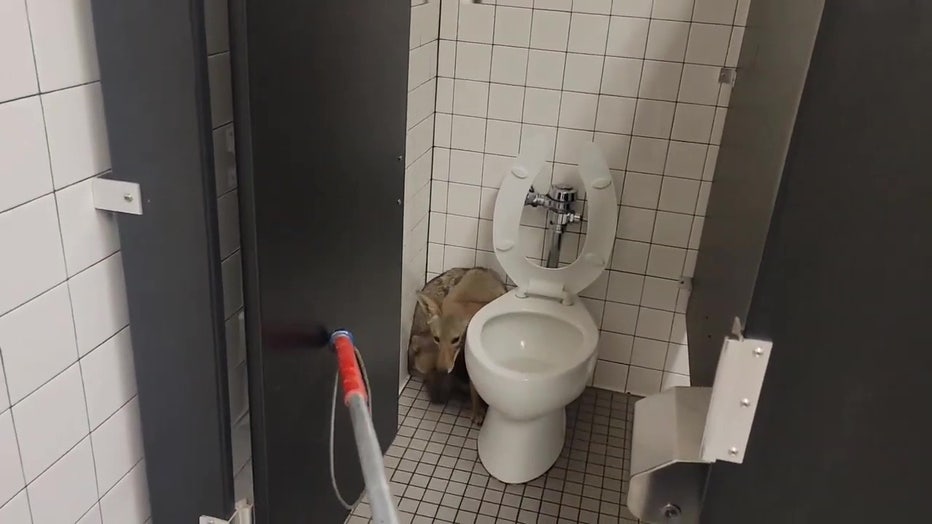 "That's not a pup, that's a full-grown coyote," Luna is heard saying on video. While the moment the animal was lassoed wasn't caught on camera, the video cuts to Officer Luna dropping the coyote off in the wilderness.

No one was affected by the coyote on campus. The coyote ran into the bathroom before classes were in full swing Monday morning, according to officials.

"We are pleased that this incident was smooth and all the children were okay and we were able to get the coyote back to its more natural habitat," Animal Services Director Erin Gettis said.