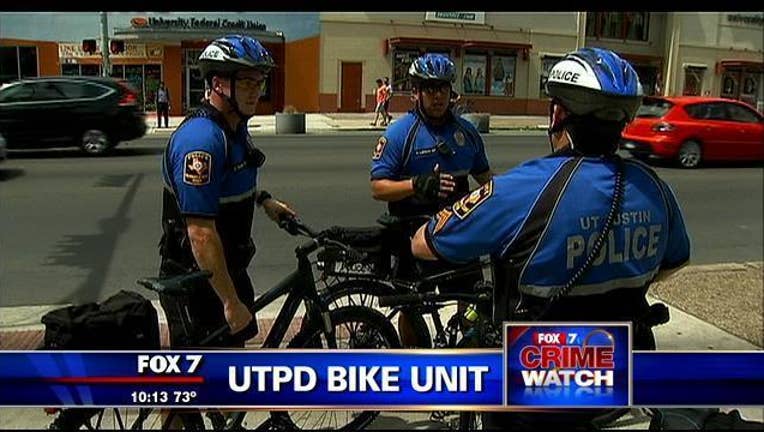 AUSTIN, Texas - Parking and traffic on the UT campus is just as much of a nightmare as it is throughout the rest of Austin. The campus police have found a way to get around it and respond to emergencies much faster. In tonight's Crimewatch, FOX 7 introduces the department's new bike unit.

The drag is packed with UT students during the school day, and with more and more housing becoming available around campus, those who don't bleed orange and white are congregating there more often.

"It could be so much as someone shoving somebody or cursing them out or making that student feel unsafe," said Chief David Carter.

UT Police Chief David Carter says he's noticed a recent uptick in assaults along Guadelupe by the West Mall. The solution to the crime, he says, is the department's new bike unit.

The unit got rolling last Wednesday and FOX 7 was with them.

"Really it's community policing at the end of the day. We want our officers to be visible and approachable to all of our students who are out here," Carter said.

The officers are in bright blue. They are easy to see and easy to flag down in an emergency.

UTPD is slowly expanding its coverage to West Campus, an area once patrolled solely by Austin police.

"Every police department is limited on resources but now that we've got these additional officers trained up we're actually able to start this full time unit," Carter said.

"It really keeps things, everybody is on their best behavior. It's that presence that keeps problems from happening," Norman said.

Norman says the typical crimes are aggressive panhandling, graffiti and drug use.

"The things I told you are disorder problems, but when it's too disorderly real crime starts to happen," she said.

The officers will not just patrol this side of campus. Carter says he will monitor crime trends campus-wide. When problems arise, Carter says the bike unit will respond.

"It's well known that having officers visible in any given area it makes that area safer. Things are less likely to occur in front of a police officer," said Carter.

26 UT officers are trained to patrol on bikes. Five officers will patrol full-time. The others will supplement when needed.