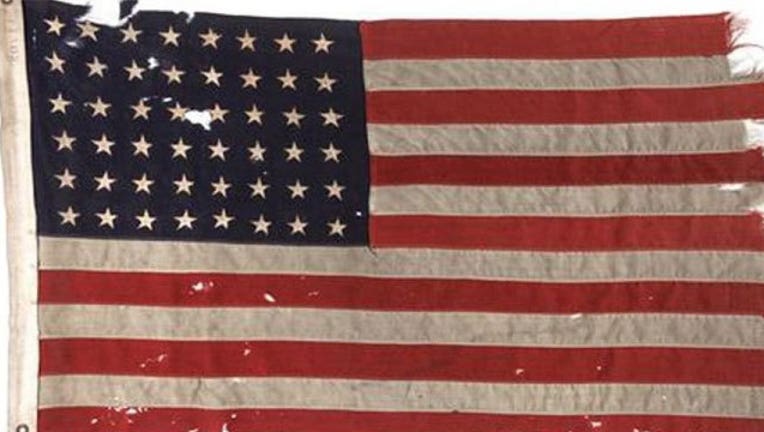 This undated photo shows a U.S. flag flown on the stern of the boat that led the first American troops onto Utah Beach on D-Day. (AP)

DALLAS (AP) — The U.S. flag flown on the stern of the boat that led the first American troops onto Utah Beach on D-Day was sold on Sunday for $514,000 at auction in Texas.

Heritage Auctions spokesman Noah Fleisher says the 48-star flag from the guide boat was sold during a live auction in Dallas. Fleisher had no immediate information on the buyer.

The pre-sale estimate for the flag was $100,000. The banner has one bullet hole, blamed on a German machine gun, according to the Dallas-based auction house.

Online bidding began about two weeks ago, according to Fleisher, ending Saturday night with a top bid of $125,000. Live bidding started Sunday at that level, he said.

"It opened at $125,000, so obviously spirited bidding brought it up to the price," Fleisher said.

D-Day marks June 6, 1944, the date during World War II when the Allies landed on the beaches of Normandy, France, beginning the liberation of Western Europe from the Nazis.

Heritage says the guide boat's skipper, Lt. Howard Vander Beek of Cedar Falls, Iowa, kept the flag up until his 2014 death. The seller acquired it last year when Vander Beek's family sold the historic item at an estate auction.

This story has corrected to fix the spelling to hole, not home.