The process to select a jury for the Darrell Brooks trial began again Tuesday morning, Oct. 4 in Waukesha County. The jury selection process was expected to resume at 8:45 a.m., but almost immediately, there were disruptions and delays from Brooks, picking up right where we left off on Monday.

WAUKESHA, Wis. - The process to select a jury for the Darrell Brooks trial began again Tuesday morning, Oct. 4 in Waukesha County. The jury selection process was expected to resume at 8:45 a.m., but almost immediately, there were disruptions and delays from Brooks, picking up right where we left off on Monday. Brooks was again moved to a separate courtroom for the voir dire.

The defendant kept asking the judge to state her name on the record, asking, "Do you have a claim against me?" The judge told Brooks he could not continue these disruptions. She indicated after the next interruption, he would be removed from the courtroom.

Around 9 a.m., Judge Dorow stopped the proceedings after about a dozen interruptions, telling Brooks minutes before, "You haven't let me get in one sentence. It is only 8:57."

"You have flagrantly disregarded elementary standards of proper conduct. That conduct will not be tolerated," the judge said. "You stating things even in a mild-mannered tone of voice does not change the fact that we have had a dozen or more interruptions by you." 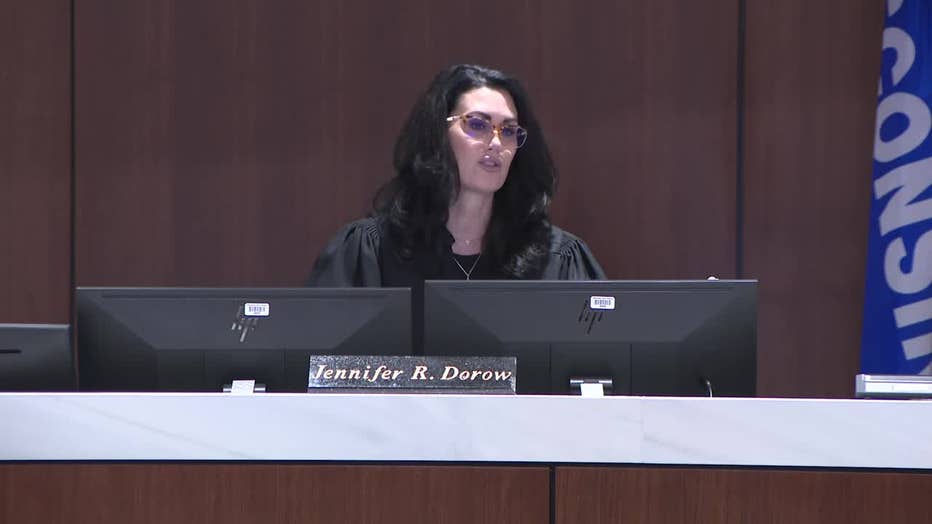 Brooks was then placed in an adjacent courtroom; Tuesday starting much like Monday did.

Below is a timeline of events from the second day of Brooks' trial, per court records and FOX6's observations in the courtroom:

Brooks refuses to state his name for the record; asks for Dorow's name

Brooks asks if Dorow "has a claim" against him

Dorow "lost count after six interruptions" in the first 12 minutes

Dorow says Brooks hasn't let her "get out one sentence"

Brooks rips up jury chart he's given -- throws it in trash

Brooks stands with a book in his hand

Brooks claims to have trouble hearing in the adjacent courtroom -- Dorow says it's the first time she's learning of hearing problems; gives Brooks a headset

1:34 p.m.: Brooks says he doesn't want to go back to the main courtroom

1:37 p.m.: Recess, Brooks brought back into the courtroom

1:47 p.m.: Brooks says he doesn't understand the charges against him

1:58 p.m.: Brooks' microphone turned off due to interruptions

Potential juror dismissed for cause

Brooks requests any juror with a sequestration concern be stricken; denied by the judge

3:05 p.m.: Brooks declines to come back into the main courtroom

Judge reads witnesses submitted to the court to the prospective jurors

One juror is stricken for cause

Brooks again moves to strike the entire jury panel; denied by the judge

Brooks is not cooperative with peremptory strike process

Of the 10 peremptory strikes for each side, Brooks made two; otherwise, he crossed out the numbers of every potential juror on the page, and the clerk had to use a tumbler to make a random selection on his behalf for the other eight strikes

Brooks again declined to return to the main courtroom

After 6:30 p.m.: All 16 jurors selected for the panel are sworn in -- ordered to return Thursday morning for opening statements

Shortly after 9 a.m., when the cameras to the courtroom were allowed back on, the judge clearly explained why Brooks was placed in the other courtroom. Dorow indicated Brooks was muted in the proceedings, and she noted he appeared to be yelling in the secondary courtroom. 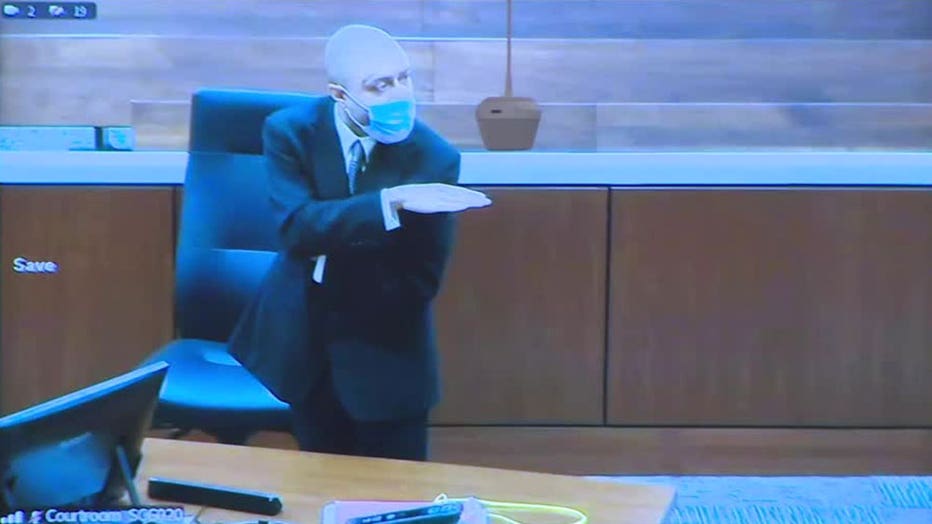 Judge Dorow proceeded with the jury selection process until around 11:20 a.m. when there was another break. At that point, the judge asked if Brooks wanted to come back into the main courtroom.

"I know he’s been seated for quite some time. He appears to be from my perspective diligently taking notes," Judge Dorow said. "So I would offer him, if he can abide by the rules of decorum and civility, he is welcome back to this courtroom." 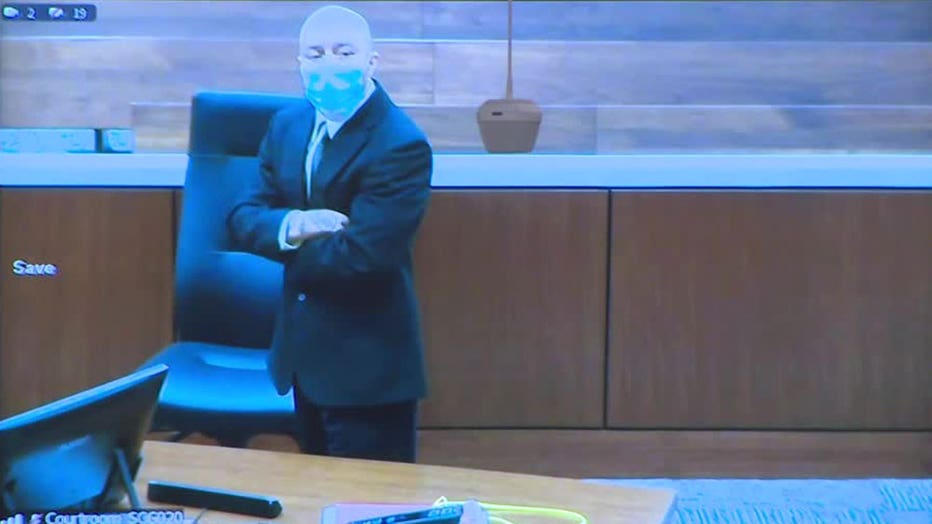 Brooks said he did not want to come back, and prosecutors noted Brooks never asked to come back. He was present when the jury pool was brought back in after lunch. It took less than 10 minutes for him to cause a disruption, which happened as jurors entered. As soon as the jurors were seated, they were asked to leave, and Brooks was moved to the adjacent courtroom again.

At one point, Brooks said he wanted all potential jurors stricken. Heading into the afternoon, more than 20 prospective jurors had been stricken.

Judge Dorow asked Brooks shortly after 1:30 p.m. if he wanted to come back to the main courtroom, and Brooks refused. He later stated he had difficulty hearing in one ear, and Judge Dorow noted it was the first the court knew of any hearing problem. The judge issued him a headset to wear.

As the proceedings continued Tuesday afternoon, Brooks also informed the court that he does not plan to call Dawn Woods, his mother, as a witness. Woods was on the defense's original witness list. 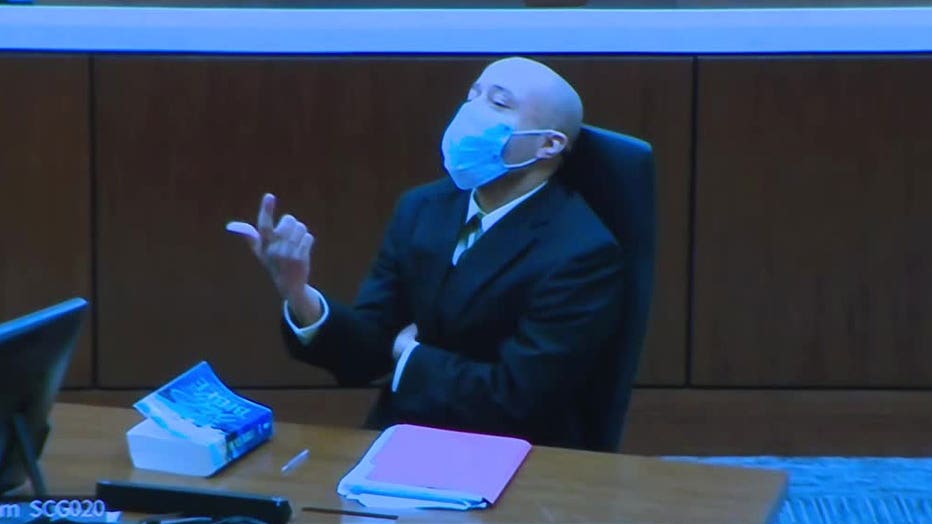 Less than 10 minutes after he was brought back into the main courtroom, Brooks asked to return to the adjacent courtroom around 2 p.m. The judge also gave Brooks permission to retrieve his witness list from his cell, but Brooks refused.

"He is continuing with his disruptive behavior," said Judge Dorow during the exchange in which Brooks refused to go to his cell for the witness list. "It is his choice to do that."

Dorow again warned Brooks he would be removed from the courtroom if he continued with his disruptions.

"Remove me. Remove me," said Brooks.

"You’re requesting to go to the other courtroom?" asked Judge Dorow.

"Remove me," said Brooks. "I told you that before I even came over here. It was pointless for me to come over here. You can smile all you want."

"Sir, my preference is for you to be here," Dorow said as Brooks yelled. "You have yet to answer one question that I asked you."

Brooks, continuing to shout, was taken to the adjacent courtroom shortly before 2 p.m. 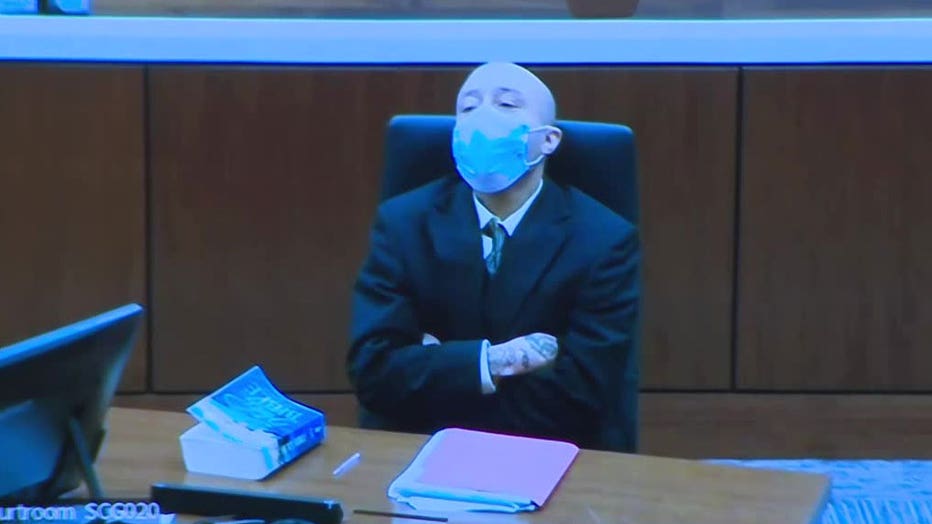 Around 3 p.m., the court was in recess, preparing to bring in all prospective jurors who had taken part in questioning Monday or Tuesday.

Brooks told the court he wished to call the State of Wisconsin to the stand. Dorow denied the request, telling Brooks he cannot call an entity to the stand; he must call a person.

The judge also denied Brooks' earlier request to strike all potential jurors for cause. 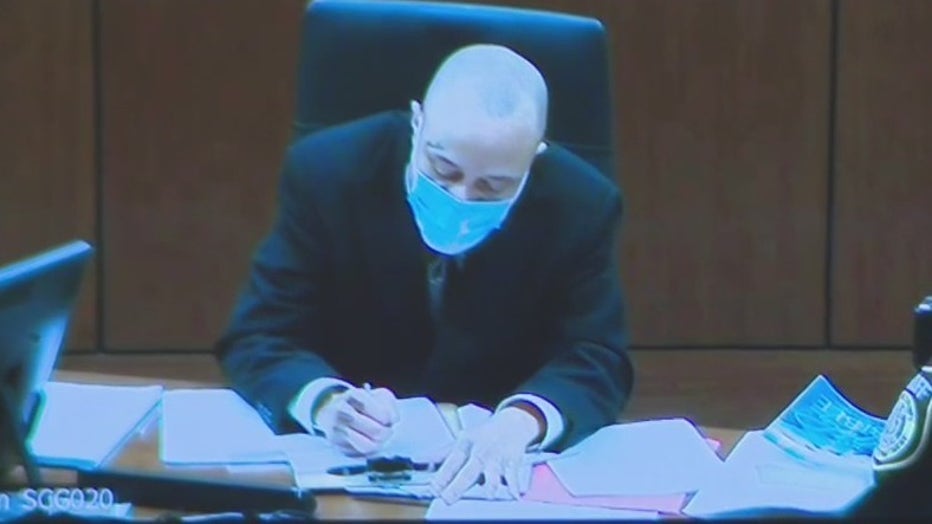 As of 5:30 p.m., Brooks declined to conduct his peremptory strikes of potential jurors. From a pool of 36, each side, state and defense, got 10 strikes, done in succession, to get the pool down to 16 jurors. The state marked one number off and then handed a clipboard to the bailiff to bring to Brooks in the adjacent courtroom. Instead of crossing off one number, he crossed off every potential juror -- in line with his request to strike all prospective jurors for cause.

This is not permitted during peremptory strikes, so instead, a provision in state statute allowed Clerk of Court Monica Paz to pick one name by lot from a tumbler with each of the 36 jurors' assigned numbers for the "defense pick."

The judge allowed Brooks the chance to strike a potential juror each time, and each time, he continued to cross off all of the numbers. 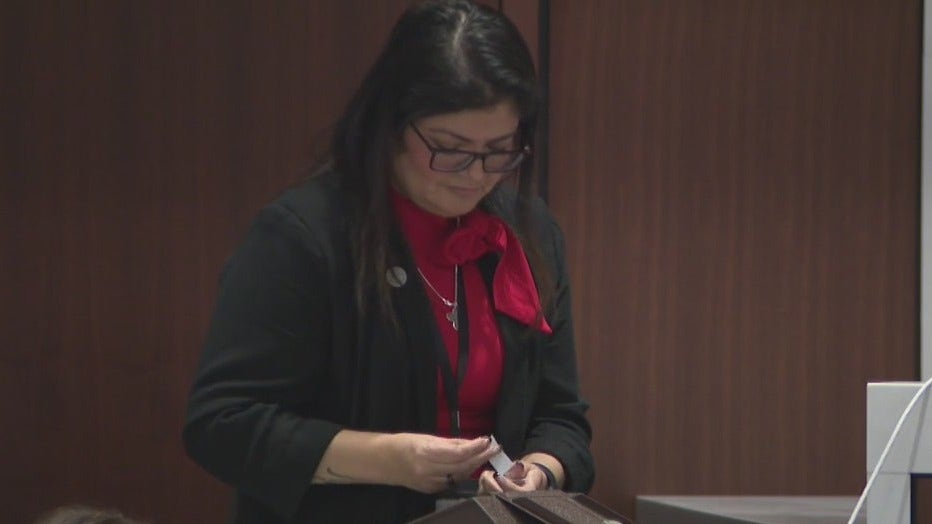 After declining his first eight peremptory strikes, Brooks did make his final two. Afterward, he said he still doesn’t "accept the jury," maintaining that the entire jury should be stricken for cause, despite not offering specific proof or statute to back it up. He accused the judge of bias toward him again. Dorow responded by saying the jury had been empaneled.

The court empaneled a 16-member jury Tuesday in the Darrell Brooks trial; 10 men, six women, all white. This, after Brooks refused to cooperate with the peremptory challenge process, and the court clerk had to pick random juror numbers to be stricken from a tumbler on Brooks' behalf.

The jury was ordered to return at 8:30 a.m. Thursday for opening statements.

Now that the jury is selected, we can tell you they were asked more than 100 questions, including: Do you accept Brooks is innocent until proven guilty, do you have bias for or against Brooks because of his race and have you seen, heard or read any news coverage on the case.

On Wednesday, the court will handle final housekeeping issues before the start of the trial itself, including how objections will be handled, the plan for opening statements, logistics of where Brooks will be, etc.

Darrell Brooks trial: What can judge do about disruptions?

As jury selection continued Tuesday in the trial of Darrell Brooks, so did disruptions from the defendant. Attorney Julius Kim joined FOX6 News to talk about the role Judge Jennifer Dorow has in keeping those disruptions to a minimum at the trial proceeds. 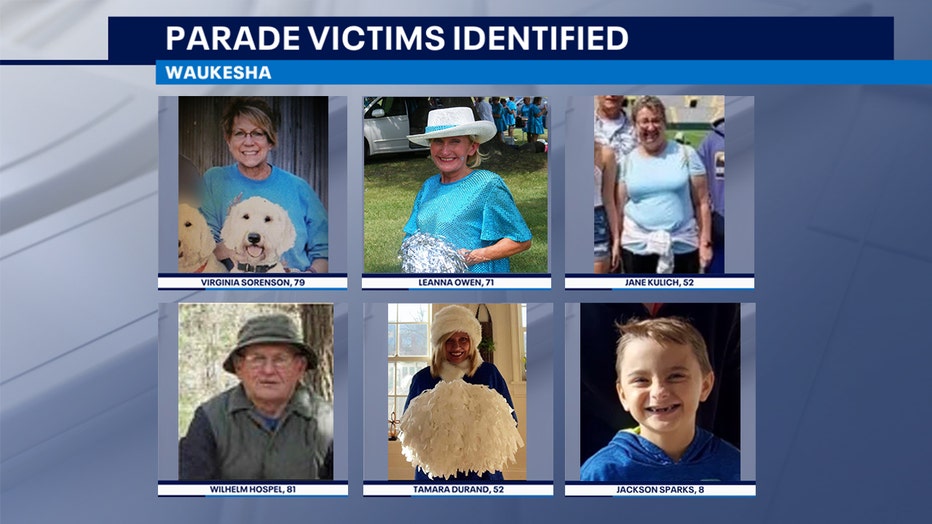