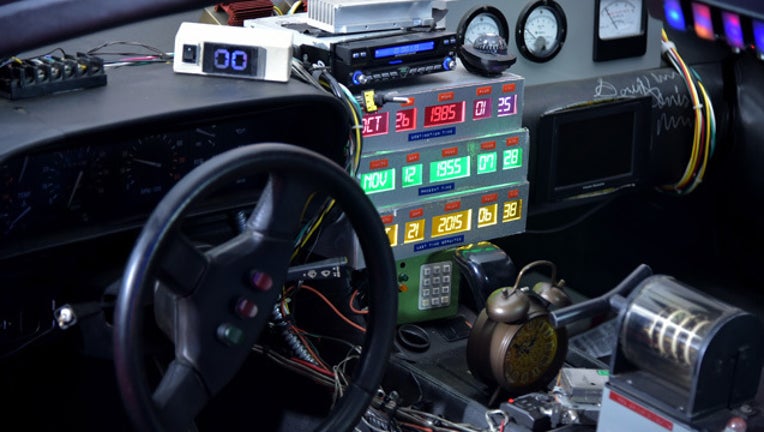 NEWARK, N.J. (AP) - The widow of maverick automaker John DeLorean has alleged in a lawsuit that a Texas company illegally received money from the "Back to the Future" movies that used his iconic car.

The sleek, angular car with gull-wing doors known simply as "the DeLorean," was featured in the 1985 movie starring Michael J. Fox and a 1989 sequel, about a kid who travels back in time to engineer his parents' meeting.

The lawsuit filed this week in federal court in Newark includes a contract with Universal from 1989 that gave DeLorean 5 percent of net receipts for any merchandising that featured the car and logo "as a key component."

According to the suit, the Texas company, called DeLorean Motor Company, represented to Universal that it had the right to the money and has already received "a substantial payment" from Universal.

The Texas company isn't affiliated with the one DeLorean started.

Sally DeLorean, who lives in New Jersey, settled a lawsuit in 2015 allowing the company to use the DeLorean name and trademarks. That agreement didn't transfer contractual rights to the company, the current lawsuit contends.

John Z. DeLorean was an automotive innovator who began his career at General Motors Co. and is credited by some with creating America's first "muscle" car, the Pontiac GTO, in the mid-1960s. He left GM in the early 1970s to launch his own company that eventually produced the DMC 12.

Only about 9,000 of the cars were produced before the company went bankrupt in the early 1980s, but the car's look and cult following helped land it a role in the "Back to the Future" series. The car was chosen because it would plausibly look like a spacecraft to people in the 1950s flashback scenes, according to the Internet Movie Database.

DeLorean died in 2005, after years of court battles that included a highly publicized drug trial in the early 1980s in which he was acquitted of conspiring to sell $24 million of cocaine.

His former estate in the rolling hills about 50 miles (80 kilometers) west of New York was converted into a golf course by then-developer Donald Trump in 2004.