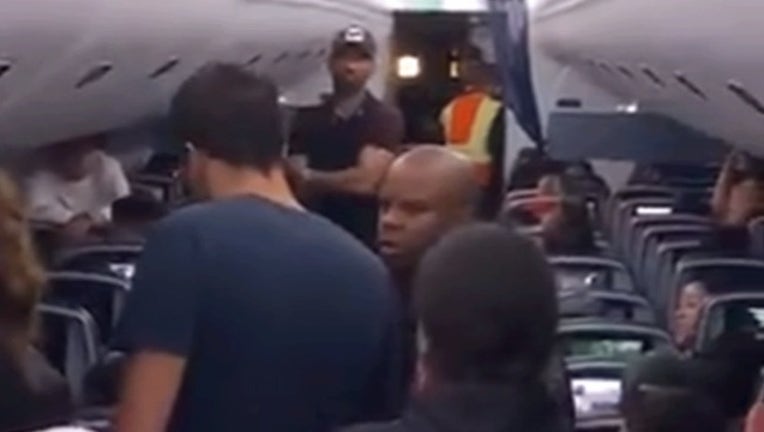 Things got heated aboard a Delta Airlines plane after it was delayed eight hours at JFK Airport. (Screengrab/Video credit: Juan Andres Ahmad)

NEW YORK (FOX 5 NY) - Things got heated aboard a Delta Airlines plane after it was delayed about eight hours at JFK Airport.

Video posted on social media shows passengers arguing with flight attendants.  It happened on Delta flight 2385 to Miami on Thursday.

Passenger Juan Andres Ahmad shared a video from aboard the plane.  It was supposed to depart at 3:52 p.m. but ended up not leaving until almost midnight.

"8 HOURS and counting. Captain had “no idea” where the ground crew was. Parked in a “remote gate” in JFK. No food, no water. A fight broke out, police was called. A NIGHTMARE."

Port Authority Police officers were called onto the plane.

In a second tweet without video, Ahmad wrote: "This has gotten out of control - there are people fighting each other and it’s gotten both verbal and physical. Police are on the plane! Complete chaos! I understand weather delays and we all want to be safe but this is not about weather but about how Delta has handled it."

A local news anchor from Florida was on the plane.  She tweeted video that showed the chaos as Port Authority Police boarded the plane.  The official Kennedy Airport Twitter account responded that the police were "mitigating the situation."

No arrests were made.

The plane had been delayed due to poor weather.  Delta denied that passengers were not offered food or water.