DFW Airport police use Taser on unruly traveler, but still need help from others to control him

DFW Airport police used a Taser on an unruly traveler, but that wasn't enough. The incident turned into a wrestling match in the middle of a terminal.

DALLAS - DFW Airport police used a Taser on an unruly traveler, but that wasn't enough.

The incident turned into a wrestling match in the middle of a terminal.

Police say this all started with the report of a man shoving an airline employee.

It then turned into two officers getting help from other passengers as the suspect, Jerome Toson Jr., fought back.

Travelers at DFW watched in disbelief at the altercation between a traveler and police in the American terminal Thursday afternoon.

“I was hoping they would just subdue him and that would be it,” said John Huston, who took video of the incident.

But instead, Huston watched a DFW Airport police officer use a Taser on Toson near gate B5.

Huston was waiting for a flight to Las Vegas when he heard the commotion.

He said he saw Toson arguing with an airline employee.

“And the passenger was just dumping water all over his jacket and just pouring water over his head and just yelling federal agent, TSA agent, kind of like he was mocking him and almost daring him to do something,” Huston recalled.

At that point, Huston said Toson pushed a female employee.

“It’s wrong. That’s when I went over there and kind of got in the middle of it,” Hultman said. “Just stepped in front of him and told him, ‘We don’t hit women.’”

“I thought they might fight, but the gate agent de-escalated it,” Huston added.

The gate agent pointed Toson out to them.

Police said he then started arguing with them, before he took a swipe at one of the officers. 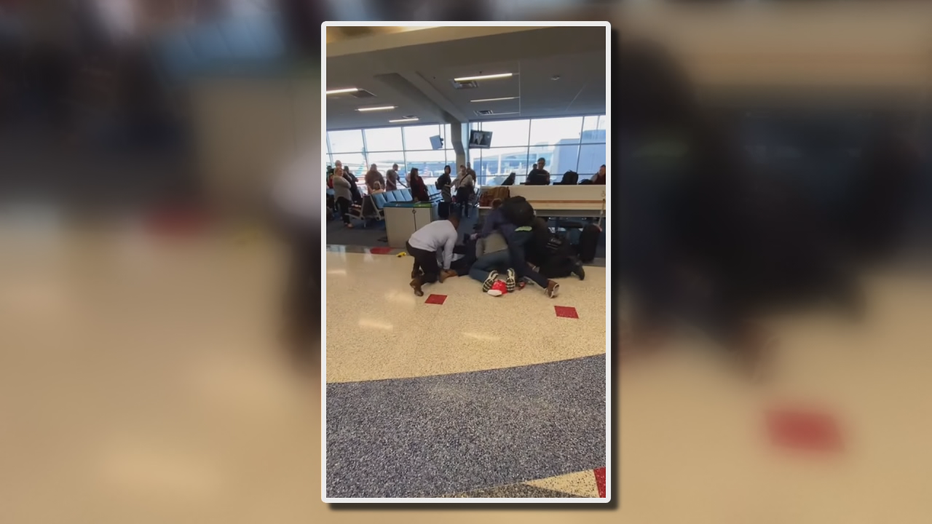 “At that point, I felt like they had to do something. I don’t know that they could have taken him on physically,” Huston said.

Video then shows the man running toward the other officer, tackling him.

“So they were wrestling, it was a pretty surreal scene. And I’m not sure which cop yelled, ‘I think he’s going for my gun.’ I think it was the younger cop,’” Huston recalled.

Police said Toson bit an officer’s arm and hand at one point.

Other passengers then jumped in to help.

“I really hope that whatever was going on with this guy, it was a moment in time,” Huston said.