Three men were caught on security cameras taking multiple dogs from a kennel and shop in Cedar Creek, near Bastrop. An investigation has been launched by the Bastrop County Sheriff's Office.

On Wednesday, owner Ja’Faar Johnson replayed the video and described how he felt when he first saw it.

"My heart dropped. I never thought that this would happen, but I knew it was possible," said Johnson.

The three men, wearing masks, spent a little more than 30 minutes on the property gathering dogs. They can be seen tossing the animals over a fence. The dogs are eventually put in a car which is parked out of camera range.

"And all my dogs are crying and running back to get back over here and they were just picking them up and throwing them over the fence so yes definitely anger in there," said Johnson.

Munchie, a customer and family favorite, was among those taken.

"Anger and violated, because we come out here every day with our children, this is supposed to be a safe spot for our dogs and our kids," said Kennel co-owner Callie Johnson.

The type of dog breeds that were taken are popular. They’re short, energetic and very solid. Each one, according to the Johnsons, can sell for about $1,000.

"My biggest fear is if they are left out in the heat, this happened Friday, me and some friends went looking for them all Saturday, going through neighborhoods it was 96° all I could think about was they are not built for this weather," said Ja’Faar Johnson. 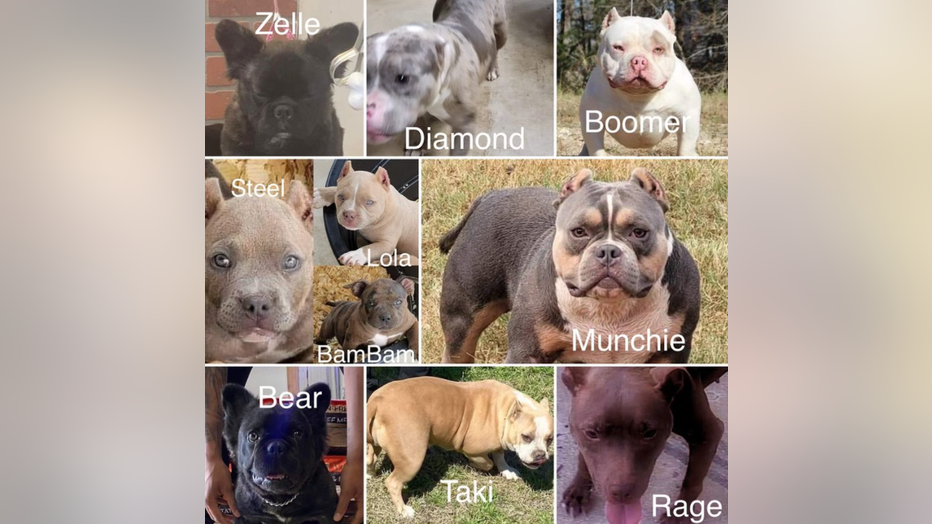 A detective with the Bastrop County Sheriff's Office has launched an investigation. A person of interest has been identified and there’s also a possibility the Cedar Creek case may be linked to similar crimes in Austin, Dallas and Houston.

"We will try to determine if this involves any kind of theft ring, a larger group that’s doing this statewide, we have not determined that at this point, but it’s not something we’re not going to overlook," said Sheriff Maurice Cook.

Since the break in, several calls have come in from people offering tips. Other callers claim they recently purchased some dogs and will return them if the Johnsons reimburse them. Most of the calls turned out to be scams.

Many of the dogs at the Johnsons' kennel have ID chips, and several of the dogs that were taken were chipped. That may help with the search.

"We are just asking anybody that knows anything to please come forward, please help us find the dogs," said Callie Johnson.

Anyone with information about this case is urged to contact the Bastrop County Sheriff's Office.