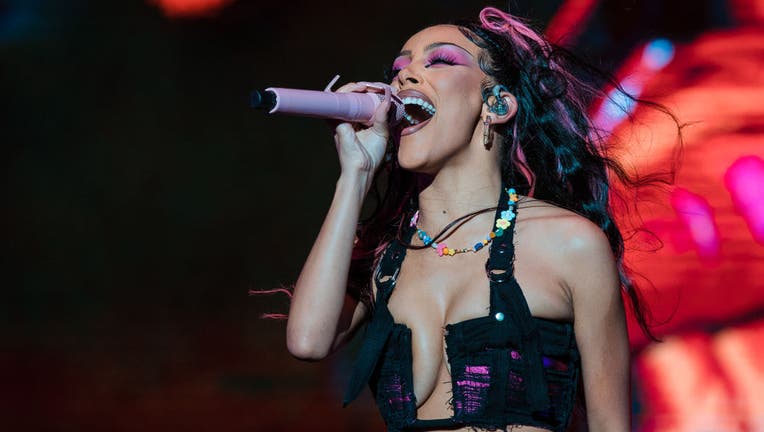 Doja Cat says she is ending her career in music.

The 26-year-old singer, whose real name is Amala Ratna Zandile Dlamini, said in a series of tweets that she no longer wishes to make music. She went as far to update her Twitter account's name to read "I quit still."

The singer's tweets have left fans shocked and confused. She began tweeting her desire to quit on Thursday after Paraguay's Asunciónico Festival was canceled due to flooding. This meant she could no longer perform in the country and led fans to share their unhappiness with the outcome.

Doja Cat did not comment directly on the cancellation but she apologized to fans for her performance in Brazil, hinting that she did not feel she performed at her best.

"I don’t think I gave Brazil a good enough show tonight at all and I’m sorry for that but thank you guys for coming out I f---ing love you and thank god we got another show tomorrow I promise I’ll do better," she tweeted.

When the singer faced criticism for her show being canceled, she responded with another tweet that reads, "I'm not sorry." In another post, she wrote, "i moved on i’m just gonna let everybody be mad."

Thingamabob turned out to be football offensive tackle for the Philadelphia Eagles Jordan Mailata on Wednesday’s new episode of 'The Masked Singer.' LiveNOW from FOX Host Stephanie Weaver spoke with the NFL superstar to learn about his experience. (Credit: FOX Entertainment)

The performer went on to say she's "not taking pictures again with anybody else after this tour."

Then, early Friday morning, the star said she plans to "disappear."

"it’s gone and i don’t give a f--- anymore i f---in quit i can’t wait to f---ing disappear and i don’t need you to believe in me anymore. Everything is dead to me, music is dead, and i’m a f---ing fool for ever thinking i was made for this this is a f---ing nightmare unfollow me," she added.

Representatives for the "Woman" singer did not immediately return Fox News Digital's request for comment.

RELATED: Everything you need to know about the 2022 Oscars

Another tweet from her account on Friday reads, "This s---ain’t for me so I’m out. Y’all take care."

Doja Cat has had immense success since breaking into the music industry. She is known for her catchy and popular singles "Say So," "Juicy," "Need to Know," "Kiss Me More," and "Get Into It (Yuh)."