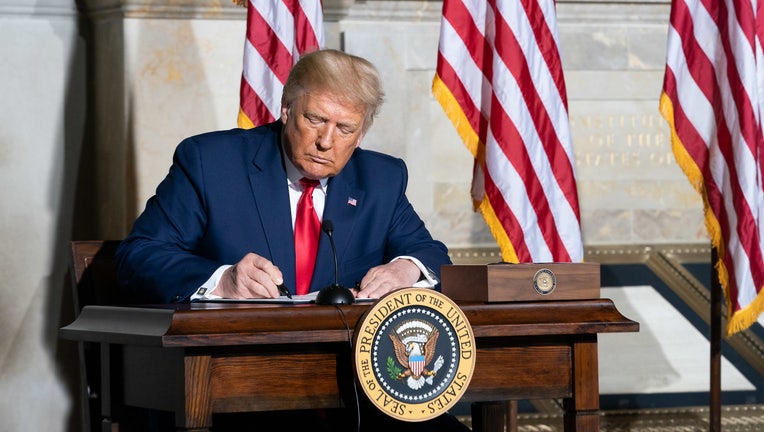 WASHINGTON - President Donald Trump is reportedly being courted for a book deal on his time in the White House that could strike as high as $100 million.

A source close to the president told Page Six that Trump, whose net worth is $2.5 billion, is being “bombarded” with book and TV deals, despite not having yet conceded the presidential election, “that could be worth a staggering $100 million.”

The White House refused to comment on the matter.

President Barack Obama and former first lady Michelle Obama earned a reported $65 million for a deal with Crown Publishing in 2017. Crown's publisher refused to say whether he would publish a book by the president.

Fox News and other major networks have called the race for Joe Biden, but the Trump campaign has filed a litany of suits alleging voter fraud and procedural violations with the vote count.

The source also said the president is being courted by far-right TV outlets. “Book and TV deals are plan-B if he doesn’t win the vote war. Translate 70 million votes into viewers and record book sales. All the anti-Trump books have made big bucks, so this from the Donald is a surefire hit.”

However, several publishers told The Associated Press they don’t believe Trump will have the same global appeal as Obama, whose memoir “A Promised Land” comes out next week.

Another publisher told Page Six the numbers “don’t sound accurate,” and could be overstated.

“One publisher to watch is Simon & Schuster,” the insider continued. They published [Trump’s] last book. CEO Jonathan Karp published several of his books there, and at Random House, and went to Trump’s wedding to Melania.

New Simon & Schuster publisher Dana Canedy told the New Yorker in July that publishing a Trump tome would be “important” to the course of history.

“Oh, he’s the President. Everyone who leaves the White House has one or more books in them and that becomes part of public history. I think that would be not only appropriate but important.”

Canedy more recently told The Associated Press she might be interested in a book by Trump on his influence over the Republican Party, which remained hesitant of his rise in 2016.

She said she would want Trump, or any author, to be “fair, balanced and honest,” and have ”a level of insight and self-awareness.”

Asked if she believed Trump could meet those standards, Canedy said, “I wouldn’t know how to answer that, quite honestly, because I would need to see the proposal first.”