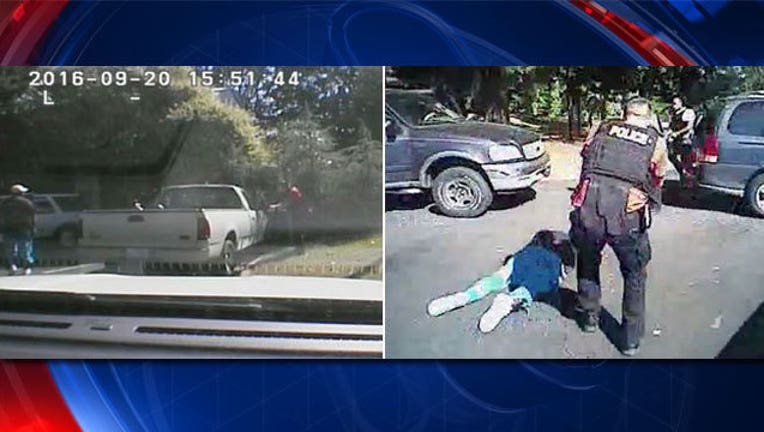 CHARLOTTE, N.C. (AP) -- Charlotte police released dramatic video Saturday that shows officers with guns drawn surrounding a black man with his hands at his side before shots are fired and he buckles and falls. It's unclear if there was anything in the man's hands in the footage, which has done little to assuage his relatives.

The footage of the fatal police shooting of Keith Lamont Scott was released amid days of protests, including an outpouring by hundreds earlier Saturday, which coalesced around demands for the public to see the video. Police said Scott had a gun, though residents have said he was unarmed.

In the dashboard camera video released Saturday night, Scott could be seen slowly backing away from his SUV with his hands down, and it's not apparent if he's holding anything. Four shots are heard, and he falls to the ground.

Police also released photos of a handgun from the scene, saying it was loaded and contained Scott's DNA and fingerprints. They also said Scott had marijuana.

The dashboard camera footage starts with a police car pulling up as two officers point their guns at Scott, who is inside the SUV with the doors closed and windows rolled up. Scott gets out and starts walking backward before shots are fired.

From a different angle, newly released police body camera footage shows an officer approach with his gun drawn and another officer already pointing his gun at Scott. When Scott comes into view, his hands are at his side and he's standing beside his SUV. The body camera footage doesn't show the moment shots are fired, and Scott is next seen on the ground.

An attorney for Scott's family, Justin Bamberg, said the footage leaves questions unanswered more than it provides clarity. "One of the biggest questions," Bamberg said, "is do those actions, do those precious seconds, justify this shooting?"

Ray Dotch, Scott's brother-in-law, objected to reporters' questions about Scott's background, saying he shouldn't have to "humanize him in order for him to be treated fairly."

"What we know and what you should know about him is that he was an American citizen who deserved better," he added.

Before releasing the footage, Chief Kerr Putney said at a news conference that he received assurances from the State Bureau of Investigation that making it public wouldn't impact the state's independent probe of the shooting.

Asked whether he expected the footage to calm protesters, Putney responded: "The footage itself will not create in anyone's mind absolute certainty as to what this case represents and what the outcome should be. The footage only supports all of the other information" such as physical evidence and statements from witnesses and officers.

Putney said that his officers didn't break the law but noted the state investigation continues.

"Officers are absolutely not being charged by me at this point, but again, there's another investigation ongoing," he said.

Putney said that Scott was "absolutely in possession of a handgun."

A police narrative released along with the video gives the most complete account yet of what brought Scott to police attention.

Two plainclothes officers in an unmarked vehicle were preparing to serve a warrant on someone else when Scott pulled up and parked next to them, according to the document.

The officers saw Scott rolling a marijuana cigar, or blunt, though they didn't consider it a priority at first, it said. But then one of the officers saw him hold up a gun, the document states.

"Due to the combination of illegal drugs and the gun Mr. Scott had in his possession, officers decided to take enforcement action for public safety concerns," the document said.

The narrative says Scott didn't respond to repeated commands to drop his weapon.

Those commands aren't heard in the body camera video, which doesn't have audible sound until after the shooting.

Amid anxiety and unease over the shooting of Scott, demonstrations in Charlotte have gone from violent to peaceful, although demands to see the police video remained a chief concern of protesters.

Before the release of the video, hundreds massed outside at the Charlotte police department building on Saturday afternoon chanting the name "Keith Scott." They also chanted, "No tapes, no peace" and raised signs including one reading "Stop Killing The Black People."

The city has been on edge ever since Scott's shooting death. The demonstrations reached a violent crescendo on Wednesday before the National Guard was called in a day later to maintain order. Forty-four people were arrested after Wednesday's protests, and one protester who was shot died at a hospital Thursday. City officials said police did not shoot 26-year-old Justin Carr, and a suspect was arrested.

The next two nights of protests were free of property damage and violence, with organizers stressing a message of peace at the end of the week.

Charlotte is the latest U.S. city to be shaken by protests and recriminations over the death of a black man at the hands of police, a list that includes Baltimore, Milwaukee, Chicago, New York and Ferguson, Missouri.