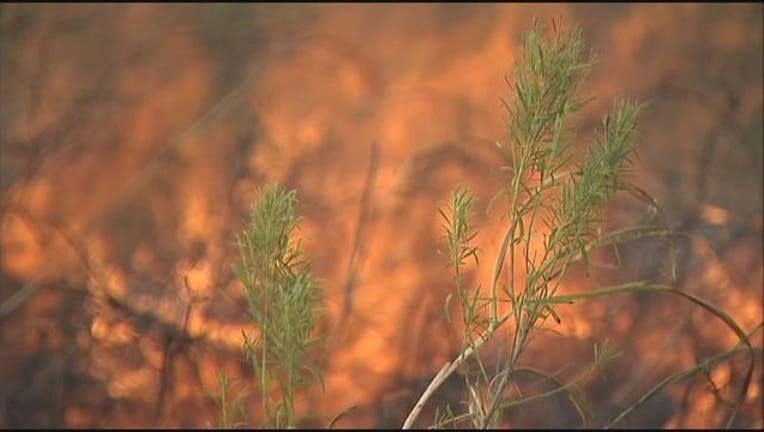 DALLAS (AP) — Larger, more threatening wildfires are occurring at greater rates as Texas faces lingering drought, consistent development — driven by millions of new residents and the spread of outlying suburbs — and changes in how the state's land is used.

Texas had 157,000 wildfires over a nine-year period ending in 2014, said Mark Stanford, fire chief of the Texas A&M Forest Service. Nearly 80 percent of those fires raged within 2 miles of a community, he said.

"When I started, that was unheard of," Stanford said. "Wildfires were a rural problem and not really a threat to communities."

Now those threats have turned perennial amid drought and development in areas that had been mostly rural. The latest danger erupted this month when the Hidden Pines fire in Central Texas' Bastrop County burned nearly 5,000 acres and destroyed 77 buildings, including 64 homes, according to the forest service. Flames threatened another 95 homes.

Four years ago, the Bastrop County Complex wildfire that destroyed more than 1,650 homes proved to be the most destructive in Texas history.

With the state population steadily growing — from about 21 million in 2000 to 27 million now — Stanford said a concern for public safety officials is people moving beyond the suburbs and into areas where brush, trees and other vegetation can fuel flames.

"I'm not slamming people who want their piece of Texas heaven," he said, adding that "people see the losses that have occurred and want to do something about it."

He said state programs such as community wildfire protection plans must be encouraged to minimize fire threats.

Texas' landscape has a much different appearance today compared to past decades, said Tom "Andy" Vestal, emergency services coordinator for Texas A&M AgriLife Extension Service. He said it's one prone to inflating fires rather than containing them.

In Texas Hill Country, for example, much of the land used to be reserved for cattle and other animals that munched on the vegetation, Vestal said.

"Land use over the past two decades has changed enormously," he said. "There are fewer grazing animals out in those rural environments."

With the addition of housing and other developments, the vegetation is left to grow and be more vulnerable to fires.

Stanford said the state's intensive agricultural practices once did a lot to prevent large wildfires. But agriculture as an economic and land-management practice has faded in parts of Texas.

"The public generally likes to look at nature as this static picture that never changes," Stanford said. "And it's actually very dynamic."

Lynne Tolmachoff, spokeswoman for the California Department of Forestry and Fire Protection, said California is experiencing the same trends as Texas: more people in rural areas building among the trees, little rain and soaring temperatures that can intensify fires.

This year alone, 8,000 wildfires have spread across 825,000 acres in California. "The wildfire season here won't let up," Tolmachoff said.

She said wildfire season traditionally ran from around June to October, but has more recently expanded by more than two months.