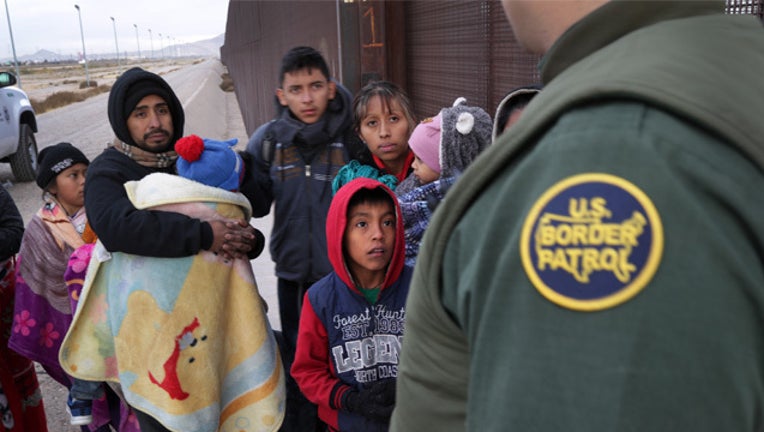 Workers in fluorescent smocks can be seen digging trenches, pouring concrete and erecting rust-colored slabs of 18-foot-high metal to replace layers of barbed wire-topped fencing along the mud-colored Rio Grande, which is usually little more than a trickle.

Most of the more than 70,000 people who legally cross four city bridges daily - to shop, go to school and work - pay the construction in the heart of downtown no mind. But on a recent weekday, one man stopped and pointed, saying simply "Trump."

In his State of the Union address, the president said a "powerful barrier" had cut crime rates in El Paso. He's holding a rally here Monday to show why he's demanding more than 100 miles of new walls, costing $5.7 billion, along the 1,900-mile border, despite opposition from Democrats and some Republicans in Congress.

But many in this city of dusty desert winds and blistering salsa, bristle at the prospect of their home becoming a border wall poster child.

Trump said barriers turned El Paso from one of the nation's most dangerous cities to one of its safest, but that's not true. El Paso, population around 800,000, had a murder rate less than half the national average in 2005, a year before the most recent expansion of its border fence. That's despite being just across the border from drug violence-plagued Ciudad Juarez, Mexico.

Many residents say El Paso embodies a cross-border spirit that transcends walls rather than proving more are needed.

"The richest of the rich, the poorest of the poor, we all have different reasons for wanting to cross, and people cross every day," said El Paso City Council member Peter Svarzbein.

El Paso lays bare the mixed feelings the border inspires. Even native Beto O'Rourke, a former Democratic congressman now mulling a presidential run, says barriers are inevitable but that Trump's calls for an expanded wall are the "cynical rhetoric of war, of invasions, of fear."

O'Rourke will help lead a Monday evening march opposing the wall with dozens of local civic, human rights and Hispanic groups at the same time Trump is holding his rally. Organizers expect thousands to turn out.

"While some try to stoke fear and paranoia, to spread lies and a false narrative about the U.S.-Mexico border and to demand a 2,000-mile wall along it at a time of record safety and security, El Paso will come together for a march and celebration that highlights the truth," O'Rourke said in a statement.

For centuries, virtually nothing but an often easily wadable Rio Grande stood between the city and Juarez. But worsening economic problems in Mexico increased the flow of immigrants into the United States in the 1970s, prompting Congress to approved chain-link fencing here and in San Diego dubbed the "Tortilla Curtain." More barriers were added in the 1990s and 2006.

Public reaction to the security measures initially was positive in some quarters because it helped reduce vagrancy and petty crime. But many residents now complain that Trump's demands have gone too far, making their home sound like a war zone and offending both them and people from Mexico.

"The border is fluid culturally, economically," said Cesar Blanco, a Democratic lawmaker who lives a stone's throw from the wall. "We are a binational community."

Those who live near the wall say they see few people climbing the barriers now. In fiscal year 2017, about 25,000 people were apprehended in Border Patrol's El Paso sector, down from 122,000-plus in fiscal year 2006.

Instead, those crossing illegally now tend to do so outside the city in desolate deserts where deaths from exposure have risen. Democrats argue that electronic sensors and patrols are a more effective answer for additional border security.

The demand for more and bigger walls has become "the supreme symbol of racism," said Fernando Garcia, executive director of the Border Network for Human Rights in El Paso. "Obviously he'll have some people attend his rally," he said of Trump, but "he cannot lie about what we're about.'"

Many Republicans, though, insist the low crime rate here is not a coincidence.

"There are regular shoot-outs near the border, dangerous narcotics trafficked," said recently elected Republican Congressman Chip Roy, who represents a district between Austin and San Antonio. "The good news is that we can stop this," Roy said in a post-State of the Union fundraising email championing a Trump-backed wall.

The FBI's Uniform Crime Report shows that El Paso's annual number of reported violent crimes dropped from nearly 5,000 in 1995 to around 2,700 in 2016. But that corresponded to similar declines in violent crime nationwide and included times when the city's crime rates actually increased year-over-year, despite new fencing and walls.

The towering barriers don't stop Juarez from almost seeming like another neighborhood in El Paso. From many places, you can see white city buses rumbling on the other side of the border and read green street signs marking that city's major thoroughfares in Spanish. Buildings more than a few stories tall in El Paso have sweeping views of downtown Juarez.

Mickie Subia's single-story home in the historic, downtown Chihuahuita neighborhood is steps from the barrier, providing glimpses of Mexico through fencing and metal slats. She said the wall doesn't make her feel safer.

Dee Margo, El Paso's mayor and a former Republican state lawmaker, tweeted after the State of the Union that his city was "NEVER one of the MOST dangerous cities in the U.S.," adding that border walls are only partly the reason.

"I'm really glad President Trump is coming here," he said in a subsequent interview. "I just hope we get chance to show him what it's really like on the border."