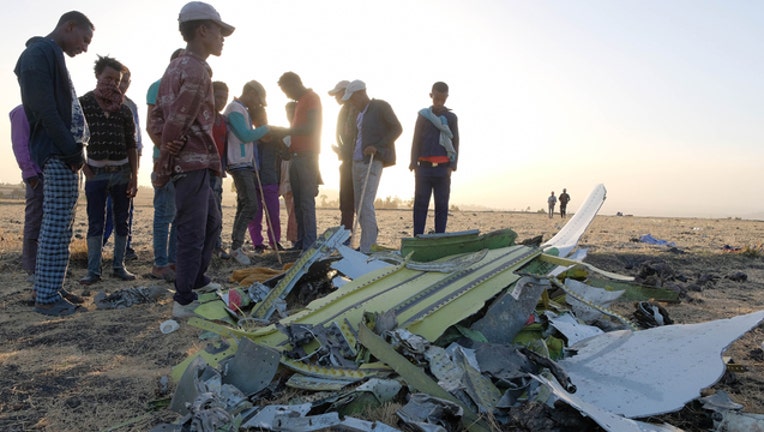 A group examine electronics taken from a pile of twisted metal gathered by workers during the recovery efforts at the crash site of Ethiopian Airlines flight ET302 on March 11, 2019 in Bishoftu, Ethiopia. (Photo by Jemal Countess/Getty Images)

Dagmawit Moges told reporters that the Ethiopian government intends to release detailed findings within one month.

"The black box has been found in a good condition that enabled us to extract almost all the data inside," she told reporters Sunday evening.

Officials say 157 people from 35 different countries were killed when the Nairobi-bound plane crashed shortly after takeoff. The United States and many other countries then grounded the Boeing 737 Max 8 as it had also been used in the Lion Air crash in October in Indonesia.

Suspicions emerged that faulty sensors and software may have contributed to the two crashes in less than six months.

The U.S. Federal Aviation Administration already has said satellite-based tracking data showed that the movements of Ethiopian Airlines Flight 302 were similar to those of Lion Air Flight 610, which crashed off Indonesia in October, killing 189 people.

The planes in both crashes flew with erratic altitude changes that could indicate the pilots struggled to control the aircraft. Shortly after their takeoffs, both crews tried to return to the airports but crashed.

Earlier Sunday, thousands in the capital of Addis Ababa mourned the country's victims in the crash, accompanying 17 empty caskets draped in the national flag through the streets of the capital. Some victims' relatives fainted and fell to the ground.

The service came one day after officials began delivering bags of earth to family members of the 157 victims of the crash instead of the remains of their loved ones because the identification process is expected to take such a long time.

Family members confirmed they were given a 1 kilogram (2.2 pound) sack of scorched earth taken from the crash site. Many relatives already have gathered at the rural, dusty crash site outside Ethiopia's capital.

Elias Bilew said he had worked with one of the victims, Sintayehu Shafi, for the past eight years.

"He was such a good person," Bilew said. "He doesn't deserve this. He was the pillar for his whole family."