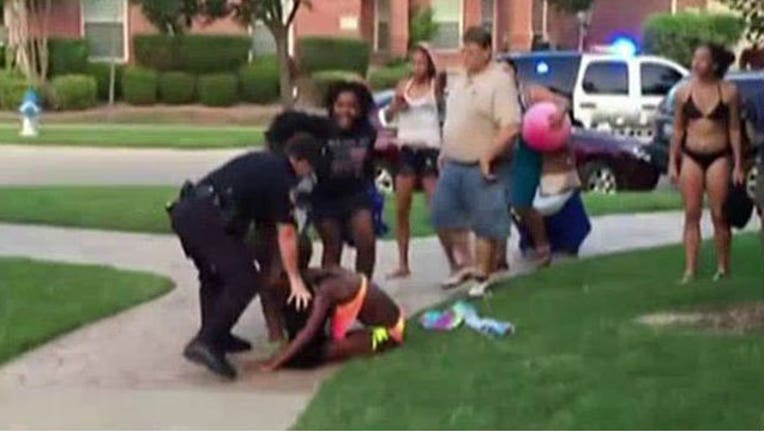 McKINNEY, Texas (AP) — A former suburban Dallas police officer who resigned after video showed him forcing a bikini-clad black 15-year-old girl to the ground will not be charged in the matter, police said Thursday.

A Collin County grand jury decided not to indict former McKinney officer Eric Casebolt, who pushed the girl to the ground following a June 2015 party at a community pool that drew a crowd of predominantly black teenagers.

McKinney police released a statement confirming the jury's decision Thursday. It was not clear just what charge against Casebolt the jury was considering.

Officials said in the statement that the investigation into the police response was turned over to the Texas Rangers, who then forwarded their report to the Collin County district attorney's office for review by the jury.

Police commanders plan to hold a community meeting Monday to discuss the investigation with residents.

Cellphone videos taken by people at the pool showed Casebolt, who is white, running after black teens and ordering them to the ground, then forcing the teen girl, Dajerria Becton, onto her stomach and placing his knees on her back. At one point, he drew his firearm after two young black men charged forward in apparent protest of the girl's treatment but holstered the weapon when two other officers intervened.

Police said officers were responding to reports that teens unauthorized to use the pool were jumping a fence to gain entry. Residents of the middle-class neighborhood had said teens attending an end-of-school party at the pool and adjacent park were acting unruly.

Casebolt's attorney, Tom Mills, told The Dallas Morning News on Thursday that, "We're glad that the system worked in his favor in this case."

Mills did not respond to a request from The Associated Press for comment.

Another lawyer for Casebolt, Jane Bishkin, said in the days after the pool party that Casebolt was not targeting minorities when he wrestled Becton to the ground. She said Casebolt at the time was fraught with emotion after responding earlier to two suicide calls.

An attorney for Becton's family did not respond to a call for comment.

The family said at the time that stress was not an adequate defense for Casebolt's actions.