JACKSONVILLE, Fla. - As Hurricane Ian continues to strengthen and aim for Florida's Gulf Coast later this week, area military officials have ordered all ships and aircraft to prepare for the expected storm.

Other ships that are required to stay in port will complete heavy weather mooring. Aircraft will also initiate evacuations from area airfields or be secured in hangars rated to withstand hurricane-force winds.

"Hurricane preparations were made months ago through a Navy-wide exercise ahead of the hurricane season," Aiken said. "Our sailors will now focus on the safe execution of those planning efforts to enable sustained fleet operations."

In addition, all Navy installations in the Jacksonville area have set Hurricane Condition of Readiness Three in preparation for the storm. All bases are currently open but are expected to close non-essential operations by Wednesday.

KNOW YOUR ZONE: FLORIDA EVACUATION MAP SHOWS WHO WILL HAVE TO LEAVE BEFORE A HURRICANE STRIKES 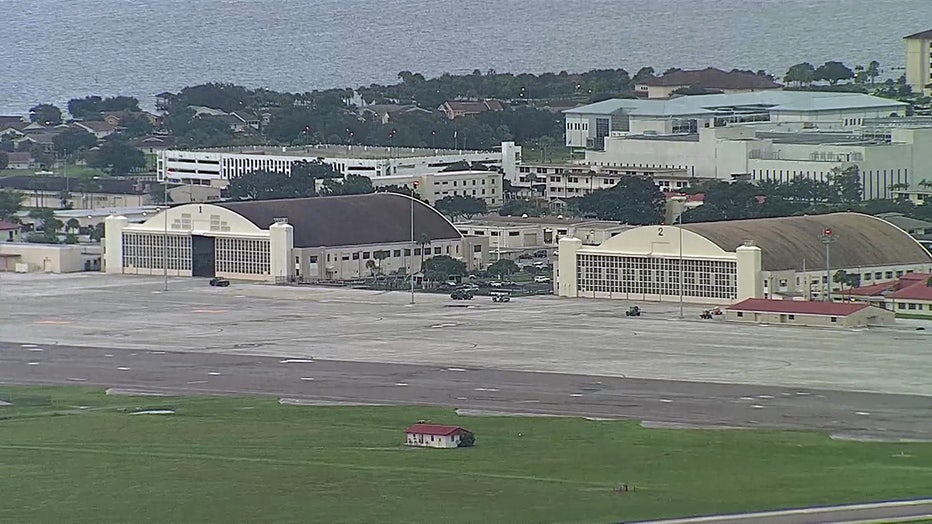 An empty ramp is seen Tuesday morning at MacDill Air Force base in Tampa, Florida. The base is bordered by water on three sides. (FOX 13 Tampa)

Hurricane Condition of Readiness Three signifies that damaging winds are expected to affect the local area within 48 hours.

"The safety and security of our people is my top priority," Navy Region Southeast Rear Adm. Wes McCall said. "Currently the forecast for Hurricane Ian remains uncertain, however the Navy remains vigilant in preparing for its arrival and will work to keep our personnel, assets and installations informed and safe."

An evacuation order was issued for non-mission-essential individuals at MacDill Air Force Base in Tampa, Florida, according to the base.

"Tampa Bay, Florida, could have the most damage because that water has got nowhere to go in Tampa Bay, and so you end up with a surge," DeSantis said in a news conference Tuesday morning. "You end up with flooding."

MANDATORY EVACUATIONS ORDERED FOR OVER 300,000 IN TAMPA BAY AS HURRICANE IAN CHURNS CLOSER TO FLORIDA

A total of 5,000 Florida National Guardsmen are being activated to State Active Duty and pre-positioned at armories across the state for response operations. As many as 2,000 guardsmen from Tennessee, Georgia and North Carolina are also being activated to assist.

As of Tuesday morning, Hurricane Ian was exiting Cuba and entering the Gulf of Mexico.

Ian is forecast to be an extremely powerful hurricane offshore of Southwest Florida by early Wednesday. Storm surge has the potential to impact much of Florida’s west coast, with the highest risk from Ft. Myers to the Tampa Bay region. The core threat zone has widened on the west coast of Florida.

Visit the FOX Weather Wire for live updates on Hurricane Ian as it barrels toward Florida. Click here for the latest forecast, evacuation orders and more.