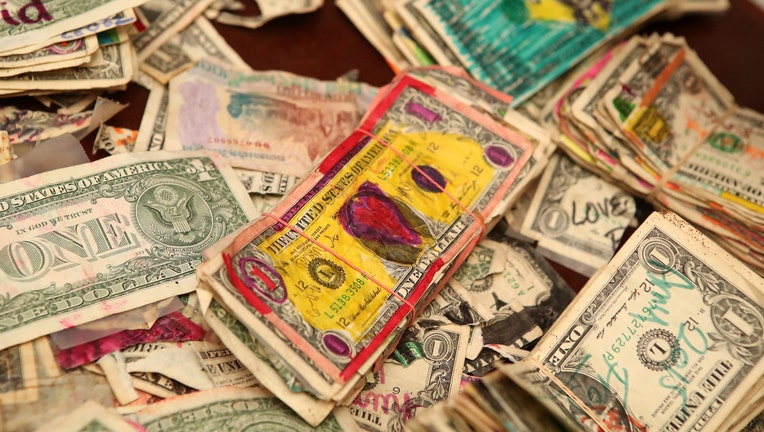 FT. LAUDERDALE, Fla. - The history of Fort Lauderdale restaurant Hott Leggz is written with magic marker on thousands of dollar bills stapled to the walls and ceiling.

On one bill, “Da Bears” is scrawled in Navy blue above George Washington’s mug, reflecting the pub’s Windy City roots. Another single, from a Jackson, Va., visitor, exclaims “I ate gator tail!” as a nod to the alligator-inspired menu. Because this is also a sports bar, most scrawled messages range from punny and PG-rated (“Lettuce Turnip the Beet!”) to raunchy and unprintable.

For nine years patrons have written these personal memories on enough cash to wallpaper every inch of the pub.

“It was a message my sister-in-law, who worked here, wrote to my nephew,” Sodre says. “She passed away last year.”

When South Florida restaurants shut down last month to halt the spread of the new coronavirus, Hott Leggz complied, laying off all but three of the pub’s 25 employees as they pivoted to takeout and delivery. Then Sodre struck on a way to help her now-unemployed staff.

“We were like, there’s literally money on the walls, so let’s donate it all to the employees,” Sodre says. “We always had a running joke that if something went wrong with the bar, at least we had worst-case-scenario money. Well, this is a worst-case scenario.”

Down came the dollars. Since March 21, Sodre and volunteers have carefully unstuck and cleaned thousands of bills, one by one. One bill, caked in years of bar dust, had 16 staples in it, Sodre says. By unofficial tally, they harvested about $10,000, with stacks of dirty bills stretched across the bar countertop.

“It’s important for us to take care of our employees,” says Ky Novak, co-owner of Hott Leggz. “At the end of the day, it’s not life-changing money, but it can get them through the next week or two.”
A Chicago Bears stronghold from the moment it opened in 2011, Hott Leggz dishes nine gourmet burgers, Chicago beef and sausage sandwiches, salads and alligator po’boys. Novak, a part-time Fort Lauderdale resident who operates a 50-year-old rib joint in Chicago, quickly realized the power of customers leaving “their personal mark” on the walls of the 2,000-square-foot pub.

For now, Novak is keeping mum about the exact amount peeled off the walls. Customers can hazard a guess by chipping in $1 with their pickup or takeout order through Monday, April 20, and the closest will receive a $100 gift card, he says.

Novak, who estimates daily revenues are down 80% at the bar, says his bar will “probably survive” the pandemic.