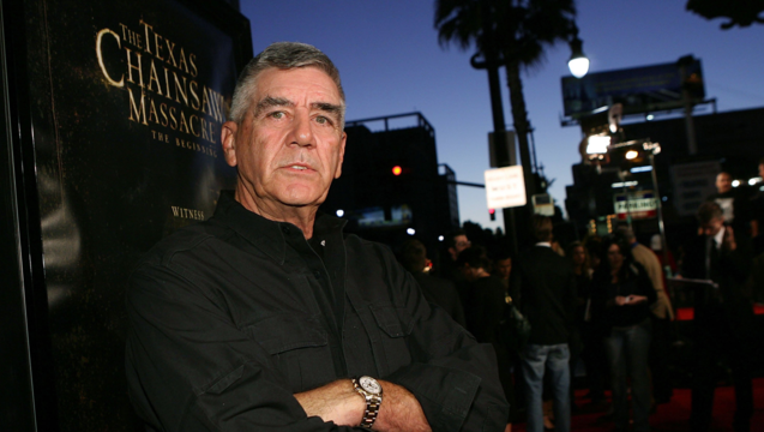 The Kanas native was nominated for a Golden Globe Award for his memorable performance in "Full Metal Jacket," in which he immortalized lines such as: "What is your major malfunction?"

Vincent D'Onofrio added: "Ermey was the real deal. The knowledge of him passing brings back wonderful memories of our time together."

Born Ronald Lee Ermey in 1944, Ermey served 11 years in the Marine Corps and spent 14 months in Vietnam and then in Okinawa, Japan, where he became staff sergeant. His first film credit was as a helicopter pilot in Francis Ford Coppola's "Apocalypse Now," which was quickly followed by a part in "The Boys in Company C" as a drill instructor.

He raked in more than 60 credits in film and television across his long career in the industry, often playing authority figures in everything from "Se7en" to "The Texas Chainsaw Massacre" remake.

The part he would become most well-known for, in "Full Metal Jacket," wasn't even originally his. Ermey had been brought on as a technical consultant for the 1987 film, but he had his eyes on the role of the brutal gunnery sergeant and filmed his own audition tape of him yelling out insults while tennis balls flew at him. An impressed Kubrick gave him the role.

Kubrick told Rolling Stone that 50 percent of Ermey's dialogue in the film was his own.

"In the course of hiring the marine recruits, we interviewed hundreds of guys. We lined them all up and did an improvisation of the first meeting with the drill instructor. They didn't know what he was going to say, and we could see how they reacted. Lee came up with, I don't know, 150 pages of insults," Kubrick said.

According to Kubrick, Ermey also had a terrible car accident one night in the middle of production and was out for four and half months with broken ribs.

Ermey would also go on to voice the little green army man Sarge in the "Toy Story" films. He also played track and field coach and Nike co-founder Bill Bowerman in "Prefontaine," General Kramer in "Toy Soldiers" and Mayor Tilman in "Mississippi Burning."

Ermey also hosted the History Channel series "Mail Call" and "Lock N' Load with R. Lee Ermey" and was a board member for the National Rifle Association, as well as a spokesman for Glock.

"He will be greatly missed by all of us," Rogin said. "It is a terrible loss that nobody was prepared for."

Rogin says that while his characters were often hard and principled, the real Ermey was a family man and a kind and gentle soul who supported the men and women who serve.