The agency said the mysterious image is really the result of a head-on collision between two galaxies.

WASHINGTON - NASA shared a spooky image that was captured in deep space just in time for Halloween.

The Hubble Space Telescope spotted the “galactic ghoul,” which appears to have a pair of glowing eyes staring menacingly toward Earth. The agency said Tuesday the mysterious image is really the result of a “titanic head-on collision between two galaxies.”

Each "eye" is the bright core of a galaxy, one of which slammed into another — while the outline of the face is a ring of young blue stars, according to NASA. Other clumps of new stars form a nose and mouth. 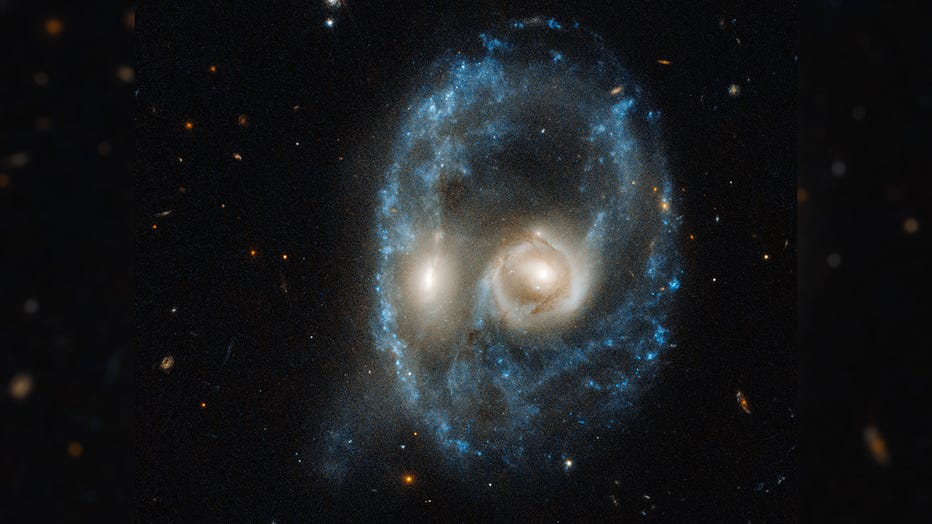 Spooky! This image from the NASA/ESA Hubble Space Telescope captures two galaxies of equal size in a collision that appears to resemble a ghoulish face staring back at Earth. (Photo credit: NASA, ESA, and J. Dalcanton, B.F. Williams, and M. Durbin -

“The crash pulled and stretched the galaxies' disks of gas, dust and stars outward,” the agency explained on its website. “This action formed the ring of intense star formation that shapes the nose and face.”

“Only a few hundred of them reside in our larger cosmic neighborhood. The galaxies have to collide at just the right orientation to create the ring,” the agency continued. “The galaxies will merge completely in about 1 to 2 billion years, hiding their messy past.”

NASA said that the two galaxies involved in the crash were likely the same size because the bulges that make the eyes appear to be the same size. More common collisions involve small galaxies that are gobbled up by their larger neighbors, the agency said.