71st Emmy Awards poised to be a night of record wins

'Veep' star Julia Louis-Dreyfus could win a seventh Emmy for the show, which would make her the most honored performer in Emmy history.

LOS ANGELES (AP) - The 2019 Emmy Awards are finally upon us, and the no-host, three-hour ceremony may prove to be full of record wins as the TV academy voters honor what they consider the small-screen’s best.

Conflicted feelings may loom for "Game of Thrones" fans who loved the series, but hated its finale. HBO's fantasy saga headed into the ceremony with a record 32 nominations, collecting 10 awards at last weekend's creative arts ceremony for technical and other achievements.

If the series adds three more wins on Sunday, it will break its own record for most awards in a season — 12, which it earned in 2015 and again in 2016. If it claims the top drama trophy, it will be its fourth; only a handful of series have ever achieved that tally. It could also build on its record of the most Emmys ever for a drama or comedy series, now at 57.

"The Marvelous Mrs. Maisel" is defending the top comedy award it captured last year, when three-time winner "Veep" was on hiatus. As with "Game of Thrones," the political satire is entered for its final season and could benefit from voter sentiment as well as evident respect.

Same goes for "Veep" star Julia Louis-Dreyfus, whose potential seventh Emmy for the show — she’s won six times as best comic actress for her character — would combine with two others she's won to make her the most-honored performer in Emmy history.

This is the time of year when the cast of HBO's "Veep" would usually be shooting a new season. Now that the show is done, actor Tony Hale says they'll have to settle for getting together at the Emmy Awards.

"Obviously, a win would be so much fun," Hale said at Friday night's reception for nominees. "But it's more a celebration just to be together. This is around the time we'd be shooting, so we're just kind of sad. So, it'd be nice to see each other and just kind of celebrate the culmination of... the seven-year journey we had."

"Veep" has won best comedy the last three times it was nominated and will try for a fourth at Sunday's Emmy Awards. Hale, who played loyal aide Gary Walsh to star Julia Louis-Dreyfus' character of Selina Meyer, has won two Emmys for his role.

There's a similar feeling for Carice van Houten of "Game of Thrones," which also wrapped its final season earlier this year.

"We've had a lot of parties along the way, of course," she said. "But this feels like it really is the end. So, I feel like we really want to go out with a blast and, you know, hopefully we'll take them all."

"Game of Thrones" is competing in six categories besides best drama, including directing, writing and acting — with stars Emilia Clarke and Kit Harington vying for lead acting honors for the first time, and Peter Dinklage seeking his fourth supporting actor award. 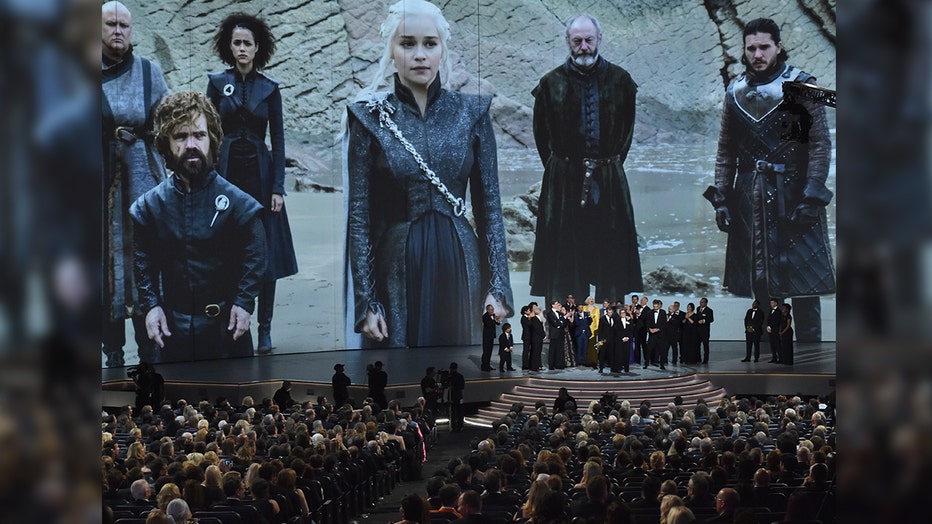 Clarke's competition includes Sandra Oh of "Killing Eve," who would be the first actress of Asian descent to win the Emmy, along with Oh's co-star Jodie Comer and past winner Viola Davis of "How to Get Away with Murder." A win for Clarke or any of the four "Game of Thrones" actresses competing for a supporting trophy would be the first for a woman on the show.

The best drama actor field includes Billy Porter of "Pose," who would be the first openly gay man to win the award, and past winner Sterling K. Brown for "This Is Us.“

The night may produce some historic female wins in the comedy category as well, and the odds are pretty good that a woman will be giving the acceptance speech after the winner of the best comedy series is announced.

An unprecedented number of the seven nominated comedies are from female creators: defending champion "The Marvelous Mrs. Maisel," ''Fleabag" and "Russian Doll." Count in "Veep," with Louis-Dreyfus as both its star and an executive producer, and women are ruling the comedy party.

Halsey will perform during the in memoriam tribute.