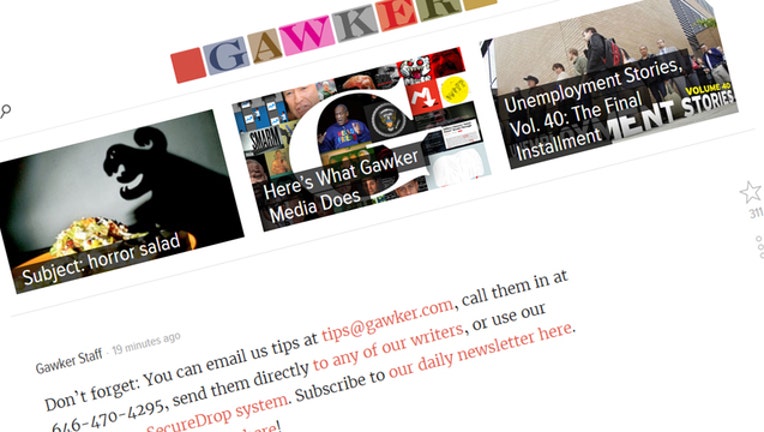 NEW YORK (AP) — Gawker.com, the brash New York website that broke new ground with its gossipy, no-holds-barred coverage of media, culture and politics, is shutting down after 14 years, brought low by an unhappy, but deep-pocketed, subject.

The news — appropriately enough, broken by Gawker itself — follows the sale of the site's parent company to Univision. Founder Nick Denton reportedly told staffers Thursday afternoon that Gawker.com will come to an end next week. Twitter immediately went berserk in an unholy mélange of shock, sadness and Schadenfreude.

Univision, the Spanish-language broadcaster, is buying the parent company, Gawker Media, for $135 million following its loss in a major invasion-of-privacy case brought by the former pro wrestler Hulk Hogan. Gawker had published a video of Hogan having sex with a friend's wife.

A Florida court awarded Hogan, whose lawsuit was secretly backed by an aggrieved Silicon Valley billionaire, $140 million in damages. Gawker Media went into bankruptcy protection after the verdict, and a judge has to approve the sale at a hearing Thursday.

"The real shame is that Gawker gave Hogan a sledgehammer with which (to) pulverize it in state court," New York University journalism professor Adam Penenberg tweeted . "If you want to ascribe blame, blame Denton."

Other Gawker Media blogs may live on. The company currently publishes seven sites in addition to Gawker.com, including the feminist-focused Jezebel, the tech site Gizmodo and the sports site Deadspin. Univision wants those properties to help build a more youthful audience than that commanded by broadcast TV.

But Gawker's real enemy, it turns out, wasn't Hogan so much as Peter Thiel, a PayPal founder and early investor in Facebook who a Gawker site had outed as gay in 2007. Thiel's vendetta against Gawker raised concerns about wealthy people covertly working to undermine media companies they didn't like.

Gawker's snarky and frequently vulgar style was influential throughout publishing. The site became a breeding ground for journalists, some of whom went on to jobs at the sort of establishment media outposts Gawker itself frequently mocked.

"I think in a lot of ways Gawker has helped to define the voice of the internet," said Josh Benton, the director of the Nieman Journalism Lab at Harvard University, who said he's been a daily reader "as long as there's been a Gawker."

The site was initially a breezy, insider-y chronicler of the media that made it a must-read for many in the industry. In later years it branched out into salacious stories of all kinds, but still enjoyed needling establishment figures in media and technology.

Denton, an outspoken a former Financial Times journalist, for now does not plan on going to Univision. He also declared personal bankruptcy as a result of the Hogan case.