Psaki comments on Gen. Milley's contact with his Chinese counterpart.

White House Press Secretary Jen Psaki commented on reports that Gen. Milley made phone calls to his Chinese counterparts during the final days of the Trump presidency.

WASHINGTON - The top U.S. military officer said Friday that calls he made to his Chinese counterpart in the final stormy months of Donald Trump's presidency were "perfectly within the duties and responsibilities" of his job.

In his first public comments on the conversations, Gen. Mark Milley said such calls are "routine" and were done "to reassure both allies and adversaries in this case in order to ensure strategic stability." The chairman of the Joint Chiefs of Staff spoke to The Associated Press and another reporter traveling with him to Europe.

Milley has been at the center of a firestorm amid reports he made two calls to Gen. Li Zuocheng of the People’s Liberation Army to assure him that the United States was not going to suddenly go to war with or attack China.

Descriptions of the calls made last October and in January were first aired in excerpts from the forthcoming book "Peril" by Washington Post journalists Bob Woodward and Robert Costa. The book says Milley told Li that he would warn Li in the event of an attack.

Milley on Friday offered only a brief defense of his calls, saying he plans a deeper discussion about the matter for Congress when he testifies at a hearing later in September.

"I think it’s best that I reserve my comments on the record until I do that in front of the lawmakers who have the lawful responsibility to oversee the U.S. military," Milley said. "I’ll go into any level of detail Congress wants to go into in a couple of weeks." 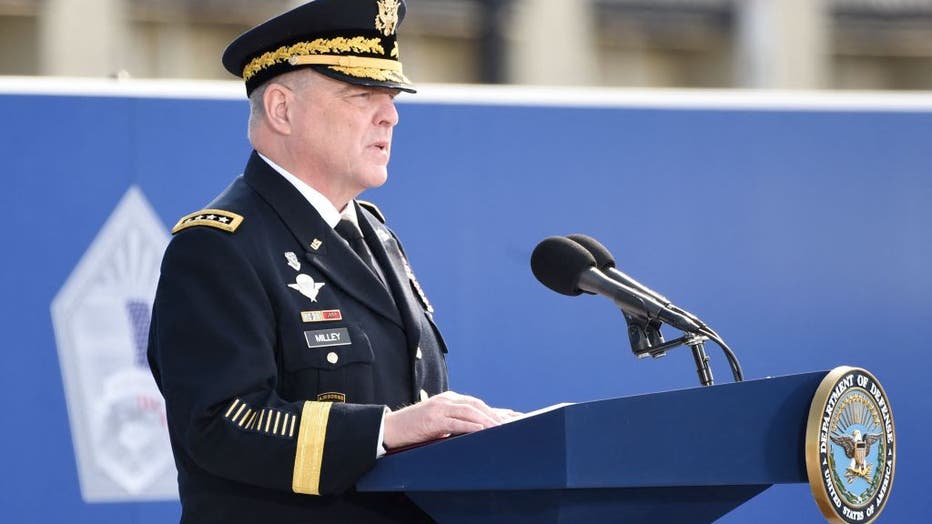 FILE - U.S. Chairman of the Joint Chiefs of Staff Mark Milley speaks during a remembrance ceremony to mark the 20th anniversary of the 9/11 attacks, at the Pentagon in Washington, DC on Sept. 11, 2021. (Photo by SAUL LOEB/AFP via Getty Images)

Milley and U.S. Defense Secretary Lloyd Austin are scheduled to testify Sept. 28 before the Senate Armed Services Committee, in what initially was going to be a hearing on the U.S. military withdrawal from Afghanistan and the chaotic evacuation of Americans, Afghans and others from that country.

Now, however, Milley is expected to face tough questioning on the telephone calls, which came during Trump’s turbulent last months in office as he challenged the results of the 2020 election. The second call, on Jan. 8, came two days after a violent mob attacked the U.S. Capitol in an effort to prevent Congress from certifying Joe Biden's White House victory.

A special House committee that is investigating the Jan. 6 riot at the Capitol has asked for details about Milley’s calls. U.S. Reps. Bennie Thompson, D-Miss., and Liz Cheney, R-Wyo., leaders of the committee, have also sought records related to the November election, the transfer of power from Trump to Biden and the riot.

Milley was appointed Joint Chiefs chairman by Trump in 2019 and has remained in that post in the Biden administration. As chairman, Milley is the top military adviser to the president and to the defense secretary.

The White House and the Pentagon chief have said they continue to have full trust and confidence in Milley.

The new book says Milley, fearful of Trump’s actions late in his term, twice called his Chinese counterpart to assure him that the U.S. was not going to attack China. One call took place on Oct. 30, four days before the American election. The second call was on Jan. 8, less than two weeks before Biden’s inauguration and two days after the insurrection at the Capitol by supporters of Trump.

Some U.S. lawmakers have said Milley overstepped his authority, and they have called for Biden to fire him. Trump blasted Milley as treasonous, called him "a complete nutjob" and said Milley "never told me about calls being made to China."

Biden told reporters after the disclosures in the book that "I have great confidence in Gen. Milley."

Milley’s office, in a statement this week, said the calls were intended to convey "reassurance" to the Chinese military and were in line with his responsibilities as Joint Chiefs chairman.

The statement from Milley spokesman Col. Dave Butler also said that the calls were "staffed, coordinated and communicated" with the Pentagon and other federal agencies.

RELATED: Gen. Milley defends calls to Chinese, says they fell within his duties

According to the book, which the AP obtained, Milley assured his Chinese counterpart in the first call that "the American government is stable and everything is going to be okay." It said he told Li, "We are not going to attack or conduct any kinetic operations against you."

"If we’re going to attack, I’m going to call you ahead of time. It’s not going to be a surprise," Milley reportedly said.

Milley spoke with a number of other military leaders around the world after the Jan. 6 riot; they included leaders from the United Kingdom, Russia and Pakistan. A description of those calls in January referred to "several" other counterparts that Milley spoke to with similar messages of reassurance that the U.S. government was strong and in control.

The second call was meant to placate Chinese fears about the events of Jan. 6. But the book reports that Li wasn’t as easily assuaged, even after Milley promised him: "We are 100 percent steady. Everything’s fine. But democracy can be sloppy sometimes."